I was the first reporter of the universe, covering events single-handedly. 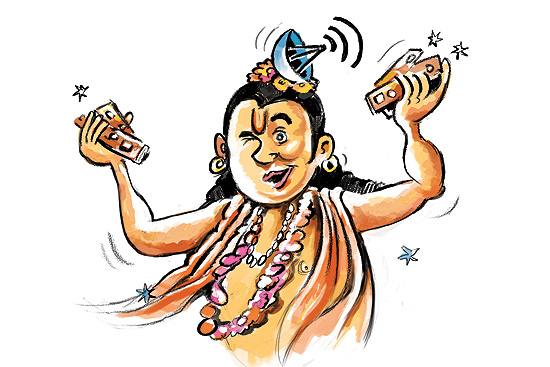 This minute above Delhi, the next over Nagpur RSS and the Organiser office. Nice to be omnipresent and travel anywhere I like. Yes, I have a special liking for the RSS who remembered that May 6 was my real birthday and not May 10. O, how nice of them to suggest that modern journalists should make me their model. After all, I was the first reporter of the universe, covering events single-handedly. The gods could detect my personal touch at every single important moment of the Kurukshetra war.

Mind you, it was a tough assignment, I mean covering the war single-handedly. There was no PTI, UNI and agencies like Reuters were busy covering their own wars like the Homeric wars, the Battle of Marathon and so on. The RSS mouthpiece Organiser recognised the important fact that I was present at every critical juncture of the Ramayana. It was a tough job and I can now confess I did doze off a little when Kumbhakarna fell asleep and got up just in time for the crucial battle against Lord Rama and his monkey army.

I do agree times had chan­ged. Even my personality has. I was quite upset when the film world portrayed Narad muni in dozens of mythological movies to enact all kinds of roles. In Tamil films, I was cast as a female sage and stars of those years like M.S. Subbalakshmi and N.C. Vasanthakokilam portrayed me quite well. But there were certain discrepancies. Unlike the historical interpretation, I never gossiped, never did I create rifts among gods and their divine spouses. And then the stereotyping. Yes, I could hum a bit, mostly bhajans but the movies and the epics presented me as a great pious singer, always clutching my veena though my favourite musical instrument was the ghatam which one cannot play standing, let alone flying.

Of course, the Organiser played second fiddle to the RSS and BJP ideology. Let me...