Next, Padmasana, A BJP Pose?

Modi gets the UN to declare a world yoga day. But is it any favour to the ancient discipline? 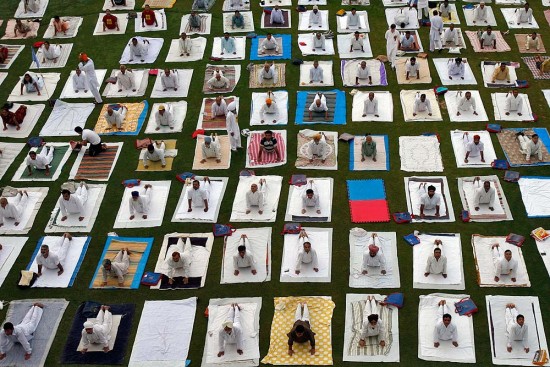 The first day of June began with the United Nations observing two “days”. June 1 was both the Global Day of Parents and what is called ‘Vesak’ or the Day of the Full Moon, according to the UN website. There are 19 such international days in June alone: they include Russian Language Day on June 6 (why not Tamil, Mandarin, Maori or Swahili?), World Blood Donor Day on June 14, World Elder Abuse Awareness Day on June 15. And, yes, June 21 is now World Yoga Day, thanks to a resolution moved by an India now ruled by the Narendra Modi government. Two days on, June 23 is International Widows Day; and June 25 is Day of the Seafarer.

With yoga on our side, we are always in good company. The resolution adopted by the UN General Assembly on December 11, 2014, “decides to proclaim June 21 as the International Day of Yoga”. The resolution recognises “that yoga provides a holistic approach to health and well-being” and that “wider dissemination of information about the benefits of yoga would be beneficial to the health of the world population”. All very true. But the general assembly also “stresses” that the “cost of all activities that may arise from the implementation of the present resolution should be met from voluntary contributions”. In other words, the spirit of the resolution says disseminate the good word about yoga but keep all initiatives voluntary. The order of the BJP government in Maharashtra, making it mandatory for schools to remain open on that day (a Sunday that too in the midst of the summer break) and for students to practise yoga, is hardly in the spirit of volunteerism.