Home Society
The Secret Diary of the Sun

The land of Mae West and Marilyn Monroe will not take our absence lying down. 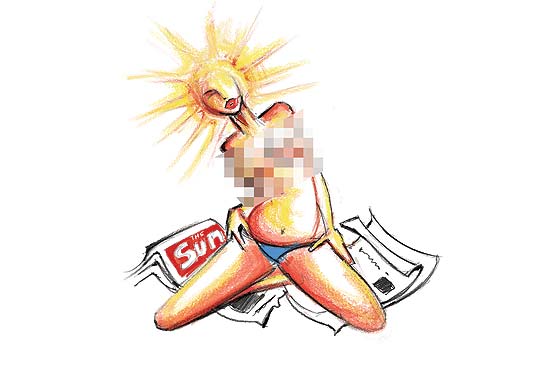 Forty-five is too young to die. Mae West was blooming at that age. Today’s women with their passion for fitness and fabulous figures go strong at 45. Why should I be ‘retired’ at this age? England is now unrecognisable, it’s an area of darkness without the Sun girls. There is no justice in the world. Old man Murdoch can tap other people’s phones, hack e-mails and do more ‘naughty’ things. He gets away with these. What have we done to get the boot, or in our case, the bum? Forty-five years we delighted the people of England and now without a thank you we are out. Didn’t Murdoch know that we were a British institution? I would say more than an institution. People had to go out to watch Buckingham palace, Lord’s cricket ground, Oxbridge colleges, Stratford-on-Avon and so on. We, the Page 3 topless girls, came to them on our own. All they had to do was open their doors, pick up the Sun, flip the pages and there we were in full glory. We held up the men’s morale and other things!

Why then the great ditch from Murdoch? Was it because ol’ Rupert got a bit tired of Page 3 content after learning from MI6 files that ex-PM Tony Blair had got more than a fair glimpse of Mrs Murdoch in her Page 3 outfit? That must have ann­oyed ol’ Rupert. Did he cry out in anguish, “Et tu Rupert, then fall Page 3”? The Page 3 pin-ups were part of history, they set off a sexual revolution—something quite unlike the French and Russian ones with their blood, guillotines and other messy stuff. We delighted males of all ages, from 8-80. During the wars, British soldiers hiding in the trenches and holding Page 3s shot and killed a record number of Nazis. Read the Sun and you will know we were the ones who helped drive the ‘Argies’ out of the Falkland islands. The British Marines were inspired by our calling the Argies ‘F...land’ Islands.