Pork, You Pine: The Rise And Rise Of Angamaly’s Porcine Cuisine

Crackle! Where trotters tantalise the tongue: the rise and rise of Angamaly’s porcine cuisine 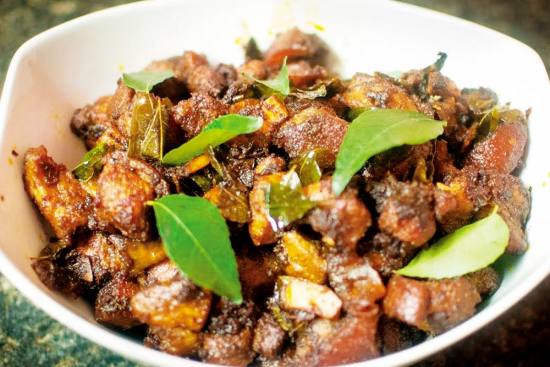 The image of a roasting pig on the spit, fat dripping into the fire, is oddly gratifying even when spotted in comic books. Definitely not kosher though. But, peering at Obelix in Asterix comics, chomping away at one irresistible mouthful of boar after another, is enough to make any rea­der break a few dietary laws. Angamalykkaar (the people of Angamaly, a small junction town near Kochi), quite like the Gauls, love their pork. One way of celebrating Anga­maly-ness is to wrap up the day with “two bits of pork and two small drinks”; the other ways we are not too sure about. ­Besides that, they have fiercely guarded a reputation for selling the finest pork in the state: synonymous with the place, it’s known simply as: Angamaly pork.

Back when it was still a village, the back-of-the-home pigsties and haphazardly fenced-in pigpens had sustained the pork trade of Angamaly; every home had a couple of pigs happily snorting and bleating away. Often pigs were adopted by poorer women in the village, to fatten them for a fee. If you couldn’t afford to buy a pig, you could still make a few bucks raising one. All was well in Angamaly; its pig econ­omy kept it in the pink of health and, culturally, Angamalykkaar continued to enjoy porcine insults with great pride: Porkae! You pork! They secretly admit these are not insults but compliments.