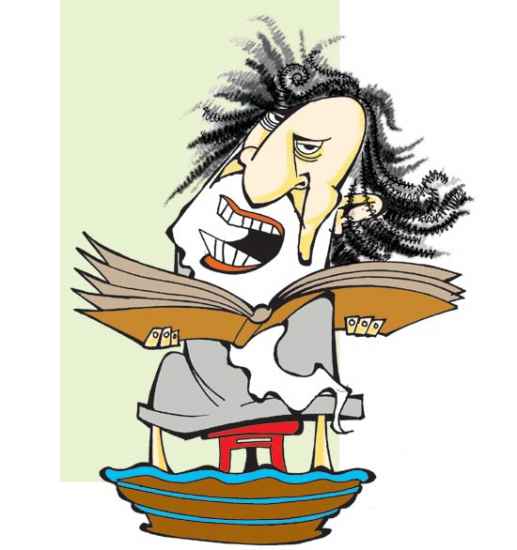 Much of Nostradamus’s work was in French. But yours truly, Professor Werner Schmidt, once a Munich-based quantum physicist and later a language expert and interpreter of prophecies (my research grant was discontinued), was lucky enough to discover certain secret notings of the celebrated seer. And, believe it or not, I found them written on a parchment in a village outside Jaipur. But then, you ask, when did Nostradamus visit India? Well, it’s a minor  detail, but that apart, the Jaipur papers (discovered in the attic of an old haveli) and written in defunct Nordic is an important find. Let me share a sample from the original which had me so excited I quickly bit off one of my toe nails: “Ni eht raey 2010, ni eht htnevele htnom, lliw eht senigne fo gniraeh enut ot daehaidaR no senigne fo gninetsil. Taht lliw htekahs seripme dna sgnik dna sneeuq.” No scholar who was shown this could make head or tail of it. One doesn’t like to boast but it was left to me to translate and interpret. First the translation: “In the year 2010, in the eleventh month, will the engines of hearing tune to Radia-head on engines of listening. That will shaketh empires and kings and queens.” Now for the interpretation: Nostradamus was very clearly predicting that the Radia tapes would become public. “What a man! What a genius,” I had told the gathering who heard me in rapt attention. However, in the days to come there were the usual sceptics who labelled the Jaipur papers as fake. In fact, according to one linguistic expert from Utah, the defunct Nordic was only English words written backwards. To this my response is: it only proves English is defunct Nordic written backwards! Unfortunately, the controversy did not end there. British tabloid News Of The World ran a front page story (‘Radia Not Radio’) on how Nostradamus was actually referring to the alternative rock band Radiohead which was thinking of changing its name to Radia-head. Predictably, Thom Yorke, speaking on the band’s behalf, denied this outright: “There’s no truth in it. We ain’t changing no name.” He also denied reports that the band was remixing the Hindi film song Pal pal har pal and recording additional vocal tracks over the phone. “This film song, the tune of which resembles Cliff Richard’s Theme for a Dream, is not something Radiohead will ever touch,” he said.

Meanwhile, thanks to my labours, we have a few thoughtful tips given by Nostradamus to journos/lobbyists/netas. Here are some of them: