Fails to offer a persuasive portrayal of individuals and relationships, the largely ineffective acting making a further hash of an already tenuous narrative. 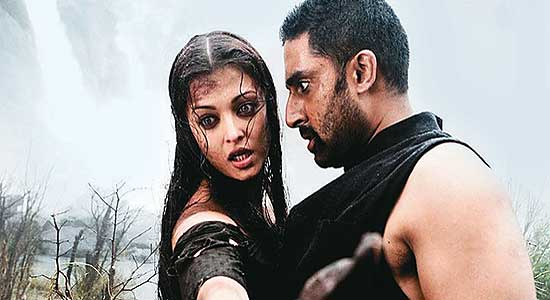 In Raavan, Mani Ratnam turns a significant issue of the day into a handy ploy. He tries to blend (very uneasily) a contemporary Naxalite figure with Robin Hood of the West and Raavan of Indian mythology. However, the element of subversion, the anti-establishment sensibility, which should have been the key, gets only vaguely heard in Gulzar’s lyrics in ‘Thok de killi’. And the moral ambiguity in the reinterpretation of the Ram-Raavan binary —how good and bad may not be so defined, how the brute might be lurking in the civilised and the wild might have redeeming qualities—does not get portrayed with any sense of profundity or conviction. Ratnam’s ambitious attempt remains facile, and we are not even coming to the straight, clumsy and laughable nods to the epic, like the lie detector test replacing the agnipariksha. In fact, Raavan essentially plays out as just another vendetta film with the entire action hinged on the wronged man trying to get back on the one who wronged him personally. So you have the outlaw Beera (Abhishek)—fighting the cops and aiding the locals—who kidnaps Ragini (Aishwarya), the wife of police officer Dev (Vikram), only to find strange emotions developing for his captive.