“Mani sir, Ravana will hit you so hard that even Google won’t be able to find you. Mind it.” 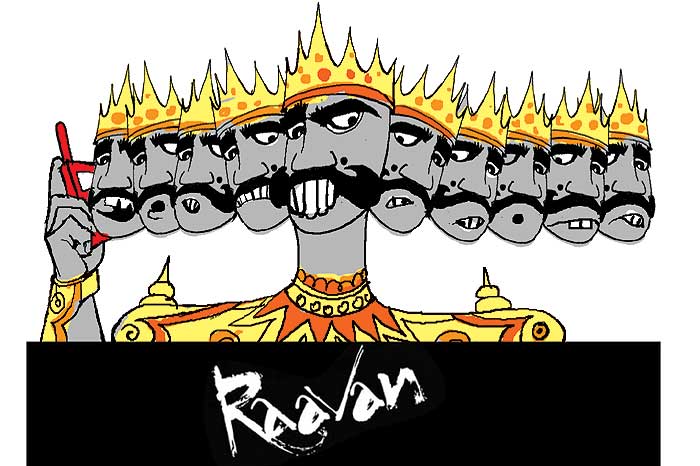 I must declare upfront that I’m most upset with Mani Ratnam sir. Yes, Ravanan (not Raavan as the film is titled) will never forgive Mani sir for choosing Abhishek Bachchan to play my part in the Ramayana. Now, admittedly, Mani sir is a good director but couldn’t he have cast Rajnikant? And, if Rajni said he can’t, he ought to have opted for Mohanlal or Sanath Jayasuriya (the Lankan cricketer deserves a break). And Aishwarya? Mani sir could perhaps have made the Baby B more emotive if he had signed on Karishma Kapoor (the two were engaged in 2002 and called off the marriage a year later) to play Sita. Anyway, Amitabhji (whose acting in Sholay got much praise in aakash and pataal) has blamed his son’s poor performance on poor editing. But I fear the real culprit was poor acting.

Also, Ravana—ok, drop the ‘n’—is most upset that his story has been so poorly interpreted. In fact, Ram (yes, the Lord himself) called to say that I look messed up in the film and that I must take Mani Ratnam and Abhishek to Lord Indra’s court. I did toy with the idea but when I approached Ram Jethmalani, he said Ravana is not a national issue and that I must approach Lankan president Mahinda Rajapaksa. Imagine me pleading with him! The very thought of it makes my ninth head ache and the nose of my sixth run. Anyway, out of frustration I called up Aishwarya who thought I was Abhishek. “The movie has already been released so you don’t have to keep saying you are Beera,” she said in the same tone and accent she used in Pink Panther 2. I said I was the original Ravana and she laughed. “Abhi, who do you think you are fooling?” she said dismissively. I passed my mobile (0000000666) to my seventh head which was in a foul mood and shot back: “Do you know who you are speaking to? This is Ravana, emperor of emperors. The one who knows the four Vedas and six Upanishads.” Nice try, she retorted. “Abhi, I know you can disguise your voice, but you don’t sound one bit like Raavan—you sound like Mani sir trying to sing God Save the Queen by the Sex Pistols.” I hung up after hearing that. The subtext of Ash’s words was not lost on me. I know for a fact that Johnny Rotten was the lead singer of the Pistols. So, was she implying that I, the great Ravana, was rotten?