Reconcile To The Truth

This defence of Bangla’s fundamentalist Jamaat-e-Islami is ludicrous 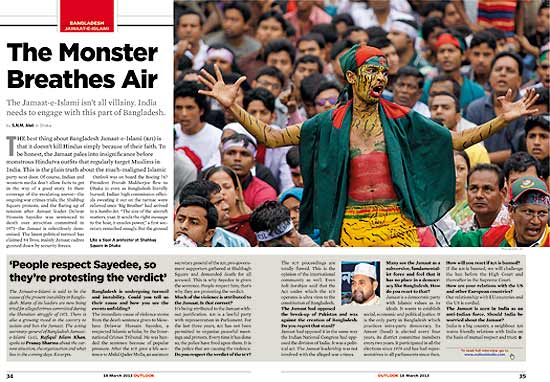 The claim that “the best thing” about the Bangladesh Jamaat-e-Islami is that it did not kill Hindus “simply because of their faith” but only targeted them as political adversaries “owing allegiance to the Awami League” is astounding (S.N.M. Abdi, The Monster Breathes Air, Mar 18). As if a secular political murder is better than a communal one. Political murder is as despicable because it runs counter to the grain of democratic politics. This is the first questionable assumption in Abdi’s analysis of the Jamaat-e-Islami. Second, having elevated the Jamaat to a dubious respectability because it doesn’t kill Hindus for their religion, he argues that India must deal with them diplomatically because its members are not “sworn enemies of India or Hindus”. In effect, he assumes that India’s foreign pol­icy is dictated by Hindu interests.

India is bigger than the sum total of its Hindu population. It is not a Hindu nation and is not in the bus­iness of promotion and protection of Hinduism. There is no Hindu ‘umma’ (brotherhood). There are, however, international conventions and covenants on human rights, religious freedom etc which India along with every other civilised nation supports. To suggest that India’s foreign policy should be based on how Hindus are treated in a particular country—be it Fiji, Indonesia, Mauritius, Bangladesh or Pakistan—is ludicrous.