Reconnect Switch Is On

The CM is on an outreach mission, sensing a drain in people’s support. Opposition dubs it political stunt. 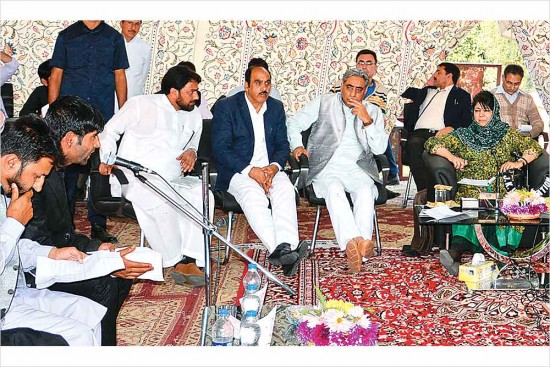 The request is unusual, and brings a broad grin on the face of Mehbooba Mufti. It is an inter­action the chief minister is having with a delegation of Pandits from their Sheikhpora colony, just three km from Budgam where they have now assembled ahead of aut­umn. Sanjay Raina, who heads the team, begins the conversation by praising the CM. He sings paeans about Mehbooba’s late father-leader Mufti Mohammad Sayeed, but the CM politely cuts that talk short. “Please start with your problem,” she says, waving her hand softly. They come up with a suggestion, which is what makes the CM smile.

For, Raina and the relocated fellow Brahmins totalling 3,000 say they want to live in close association with the native Muslims in their neighbourhood. “We should not be confined to the Pandit colony,” he adds, referring to the 365-flat gated settlement established in 2004 after their displacement in the 1990s following an outbreak of insurgency in the Valley. “We want to settle outside of the ghetto. We feel suffocated.” The CM says she will look into the matter and other demands of Pandits.