Red Is Their Colour Too 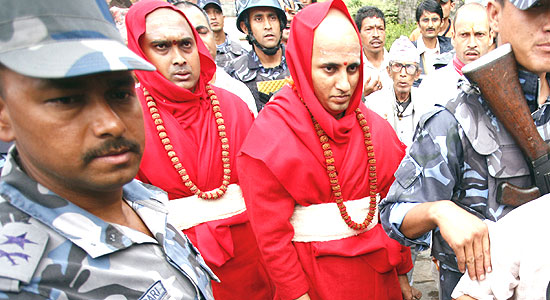 Liberation is a word hewn in stone for Maoists of different nationalities. Liberation of land, liberation from the exploiters, liberation from the cultural hegemony of the powerful. In the republic of Nepal, with the monarchy dethroned and the fledgling democracy yet to mature, the battle for liberation has shifted from the countryside to Kathmandu’s famous temple of Pashupatinath, the much-revered presiding deity of the country. The Maoists want Nepalis to replace the existing Indian priests responsible for conducting pujas, in the hope of stamping out a centuries-old tradition which symbolises, at least to the radical Red, Nepal’s cultural subservience to India.

The origin of this latest battle lies in the resignation of two Indian bhattas, or priests—Ramakant Bhatta and K.P. Ramachandran—from their duties at the Pashupatinath temple in August-end. In stepped the Pashupati Temple Sangharsha Samiti (PTSS), which invoked arguments of national pride and cultural sovereignty to demand that Nepali priests succeed the Indians. It was a demand Maoist leader and former prime minister Prachanda had abortively sought to implement earlier this year.