His working day—his surroundings, his routine, the conditions that allow him to write 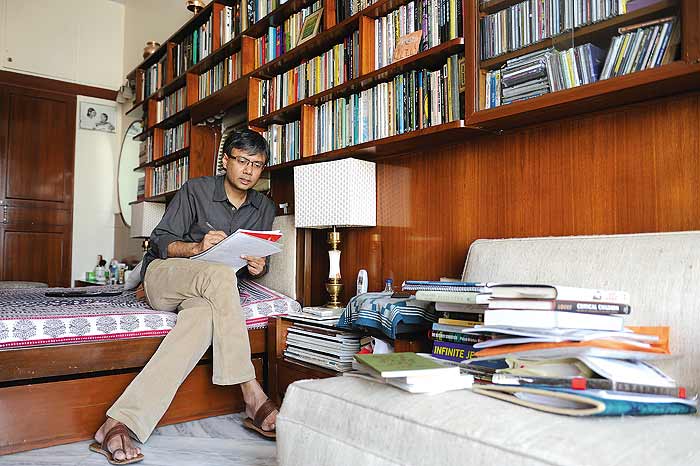 Here, the novelist Amit Chaudhuri describes his working day—his surroundings, his routine, the conditions that allow him to write. His first major work of non-fiction, Calcutta: Two Years in the City, will be published by Penguin next year.

I write in a red spiral-bound student’s notebook that I got used to when I was in Oxford; I always have back-up supplies of these. I wrote my first two novels in Indian account registers, then switched to the notebooks, and now have a sense of how many hundred words they accommodate to the page. I still use cheap English biros. As I type with one finger, I won’t approach a computer until I’m laboriously typing out the final draft and revising it as I do so. A regime is imposed on my day—not by writing, but music; the latter is like a sport, in that you can neither be a musician nor a sportsman without rigorous practice. Morning and early afternoon are spent doing riyaaz; the rest of the day is given to writing. In the evenings, I must watch hbo or dine out and forget my writing completely, or I’ll end up not sleeping later. Every two days, I’ll give my voice a rest and devote, in a prolonged spell of concentration, the entire day to writing. Sadly, I am rarely ever at what passes for my writing desk, and write, instead, on my bed, on the drawing room sofa, in my daughter's room. I find this simultaneity of location facilitating; also, some noise is congenial—complete silence brings my writing centrestage to my thoughts in a way that’s uncomfortable. Often, I write on the move, while walking from room to room, my tiny handwriting (genetically inherited from my father) made further indecipherable in the process. In this connection, Kierkegaard’s observations, quoted in Bruce Chatwin’s The Songlines, may provide an explanation: ‘every day I walk myself into my best thoughts, and I know of no thought so burdensome that one cannot walk away from it...the more one sits still, the closer one comes to feeling ill....’