Settlements, demographic change... On her own, even Mehbooba may have hit the streets on this. 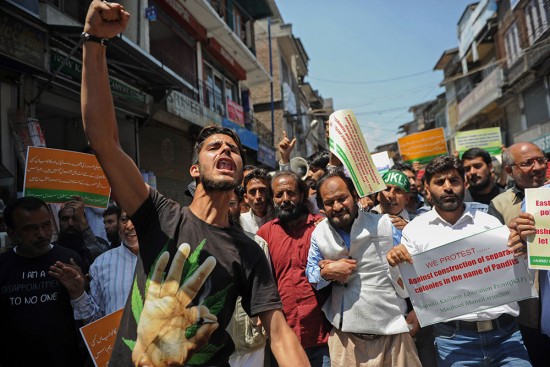 A cartoon in a local newspaper in Srinagar shows Union home minister Raj­nath Singh calling up J&K chief minister Mehbooba Mufti to enquire whether a ‘colony’ could be set up for separatists. But, nobody is laughing in the Valley. Meh­booba has denied any plan to create separate enclaves for either ex-servicemen or returning Kashmiri Pandits. On the Kashmiri Pandit question, she tried to justify the move in the state assembly by saying that Pandits needed a safe ‘transit camp’ before settling in the state. Her analogy, in which she said that resettling Pandits in the Valley would be akin to throwing “pig­eons in front of a cat”, did not amuse people and the National Conference (NC) even asked her for an apology.

The central government’s proposal to establish residential complexes for former soldiers and Pandits has fuelled anger across the Valley and brought, for the moment, an otherwise fragmented ‘azadi’ camp on a single platform.