The Centre for Wildlife Rehabilitation and Conservation near Kaziranga in Assam is the guardian angel for animals and birds in peril, especially during floods 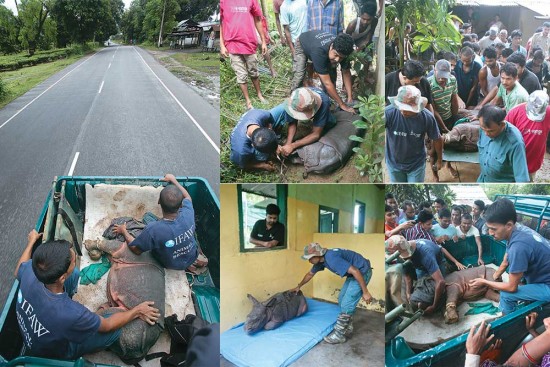 As the August sun beats down mercilessly on the floodplains of Kaziranga National Park, a leopard finds a quiet spot atop a tall tree for his afternoon siesta. It’s one of his favourite spots inside the large enclosure at the Centre for Wildlife Rehabilitation and Conservation (CWRC), a project run by the Assam forest department, Wildlife Trust of India (WTI) and International Fund for Animal Welfare (IFAW). The leopard, rescued months ago after it strayed into a village on the outskirts of the game reserve, will never go back to the wild, unlike the rhinos, elephants and the like that are rescued and hand reared in the CWRC’s sprawling complex at the Panbari Reserve Forest, about 220km from state capital Guwahati.

“We cannot teach leopard or tiger cubs to hunt in captivity. Those skills are taught by their mothers. And a leopard which does not know how to hunt is as good as dead in the wild, hence, they are sent to zoos after their rehabili­tation is complete,” says Rathin Barman, the joint director of WTI and ­inc­harge of the centre.