Is there a deal in the works on Kashmir? Will Farooq Abdullah be the instrument of a new, compromised accession? Restore statehood and leave Article 370 to the courts? 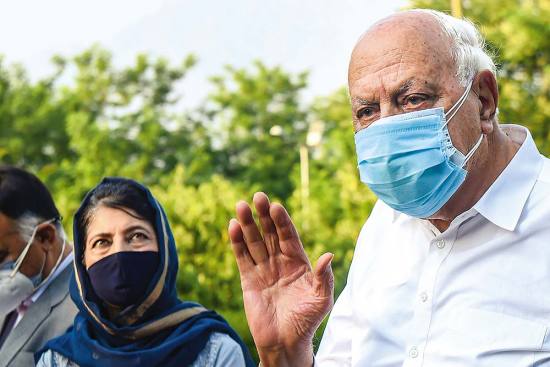 All eyes are on Dr Farooq Abdullah, again, but there’s more to it than meets the eye. The National Conference president who is riding out the coronavirus pandemic and Kashmiri scepticism over the former state’s downgraded status is trying to reassure the people, according to a party leader, that “there is no political vacuum in J&K”. The 83-year-old former CM and Union minister attracted more than an eyeroll when he convened an unscheduled meeting of the People’s Alliance for Gupkar Declaration (PAGD) on June 9, the first in six months. It was watched keenly by the Delhi-appointed administration in J&K as well the people.

The Gupkar Declaration broadly agrees to challenge the abrogation of Article 370—the constitutional safeguard bestowed on J&K when it joined the Indian Union after Independence from British rule—and demotion of the state to a Union territory under direct administrative control of the Union government in Delhi. Signatories of the pact demand restoration of Article 370 and statehood—both emotive ­issues in a highly charged region that has weathered three decades of separatist insurgency. There have also been subtle manoeuvres to undercut the ­established political leadership—such as the NC’s Abdullahs, Farooq and son Omar, and Mehbooba Mufti of the Peoples Democratic Party (PDP), who was CM with support of the BJP before the watershed on August 5, 2019, when J&K ceased to be a state and Article 370 was removed. A new political outfit, the Apni Party, sprang up from this flux in October 2019 and Delhi has ­accommodated its president, ­businessman-politician Altaf Bukhari, and its leaders in talks at the highest level, including one with the prime minister on January 24 this year.