Modi seems caught in his own image trap, which handicaps him from making the essential jump from prime minister to leader 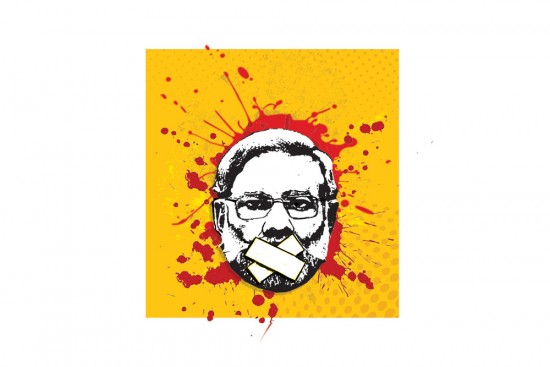 Like so many modern-day netas, Narendra Modi is never short of a word and never too far from a teleprompter. He delivers a speech every 45 hours, he tweets 5.4 times a day. He has revealed his mind on radio 15 times in the last 21 months; he has just given a first TV “interview” in two years and photocopied the answers to the papers. His face stares at us from hoardings and commercials on streets and in cinema halls. Yet, for so visible and voluble a speaker—compared to ‘Maun’ Mohan Singh, as the trolls called his predecessor—Modi’s silence when the nation is dying (pun intended) to hear him, is deafening. The lynching of a Muslim suspected of storing a questionable source of protein in his fridge could not move him to open his mouth, nor could the flogging of Dalits suspected of transporting a sacred carcass. The lunatic rants of his borderline criminal colleagues do not prompt him to step in, nor do, it seems, the sexist and casteist slurs of their blood-brothers (and, sad to say, sisters). Neither the hounding of individuals, nor the wrecking of institutions, warrants his intervention. Never has silence revealed so much.

It is, of course, a pradhan sevak’s prerogative on what he wants to talk about or when, and we do not intend to question that exc­ept to suggest that it looks like action replay, or more precisely, no action replay. However, what we can and will point out is that Narendra Modi increasingly seems caught in his own image trap, which handicaps him from making the essential jump from prime minister to leader, and the two are not the same thing. In staying quiet when the weft and warp of our wonderful nation is being silently ripped asunder, thread by thread, Modi seems content with the applause of the 31 per cent who went with him, rather than seeking to win over the other 69 per cent who didn’t. Perhaps, it doesn’t matter to him or those who can only read GDP numbers, praise be unto them, but in urging the media not to provide a platform for the mischief mongrels, the PM offers a very facile solution, virtually washing his hands off and blaming the messenger. With great power comes great responsibility. It would be a travesty to conspicuously enjoy the first and suspiciously outsource the other—silently.