India’s stellar show at the Tokyo Paralympics turns our attention to each para athlete’s conquest of personal tragedy. They are stars no less than anyone. 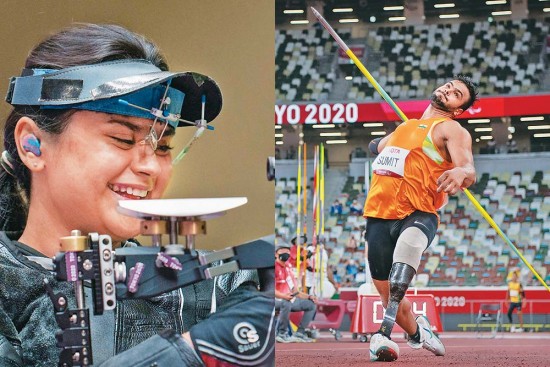 If sports is about enshrining the qualities of leaping over barriers and pushing the body to its farthest limits with expert skill, no group embodies them more than para athletes. Not for nothing did Sachin Tendulkar call them “real-life heroes”. For someone who has amassed more than 34,000 international runs in a relatively injury-free career spanning 24 years, Tendulkar calling para athletes an extraordinary legion of sportspersons is not without reason. Each of the 4,403 athletes competing in the Tokyo 2020 Paralympic Games is special. Challenged physically in various degrees, the record turnout in Tokyo is a growing testament that nothing is impossible if the mind is without fear and the body is willing.

It is perhaps impossible to name the greatest sportsperson of all times. More so when specially challenged athletes are equal, or more than equal, to their able-bodied counterparts. Tendulkar may be a cricketing great by the sheer volume of runs scored or Michael Phelps the greatest Olympian with 28 medals over five Summer Games, but they were all able-bodied men up against a phalanx of athletes nearly as good. Then, how does one categorise Trischa Zorn, the American para swimmer who made her Paralympic debut in the Dutch city of Arnhem in 1980 and won her 55th medal at Athens 2004, remaining virtually unbeatable for three decades? Congenitally blind, Trischa had combated her disability every single day, in the process setting a benchmark for the likes of Phelps and Janet Evans to emulate. In modern times, perhaps the most outstanding Paralympian is Beatrice ‘Bebe’ Vio, the 24-year-old Italian wheelchair fencer who won her second straight Olympic gold medal at Tokyo 2020. When Bebe was 11, doctors had to amputate both her forearms and legs at the knee to save her from meningitis.