Nothing hits home better than sharp wit. The comic strip is an illustrative example. 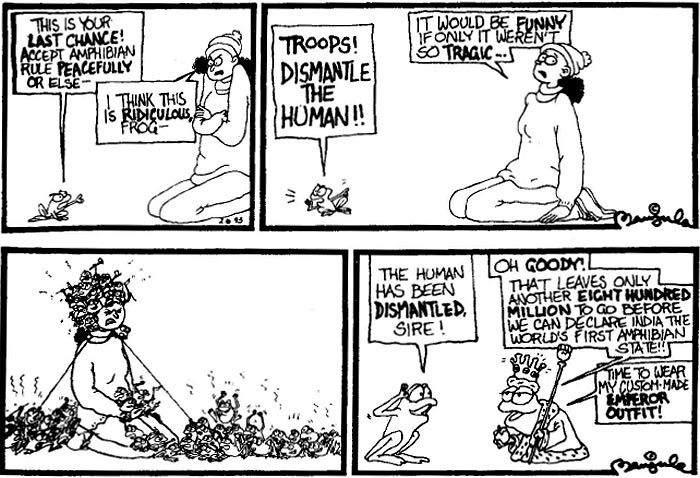 People often ask me why I stopped my comic strip Suki. A better question is: “How did it get published at all?” In a culture where the birth of a daughter is regarded as a calamity and young brides are routinely murdered, what place is there for an awkward, fuzzy-haired girl whose best friend is a frog and whose favourite activity is sleeping late? If she had been a model-actress-airhostess, a hard-working mother or a sizzling chiquette in hot pants, she may have found a market today. But Suki was stubborn about resisting pressure, and meanwhile, the culture of forthrightness into which she was born died away around her.

The majority of comic strips appearing in Indian newspapers today represent a comfortable upper-middle-class Judaeo-Christian Western world. When Indian readers turn to the funny pages, they remain largely unconscious of the complex political and ethnological messages embedded within the frames. We are so used to seeing Dennis the Menace opening gifts at Christmas that we don’t say to ourselves, “Oh there’s that little Christian boy enjoying his winter solstice festival!” His cute pink face with the mop of yellow hair has become so familiar that unauthorised versions of him turn up all over India, endorsing jalebis in a small town or decorating hand-operated ferris wheels at a village mela.