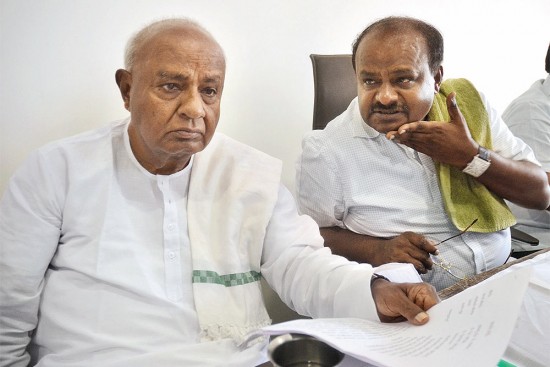 In end-February this year, Janata Dal (Secular) supremo H.D. Deve Gowda surprised everybody at the Jain shrine of Shravanabelagola by taking the arduous route to the top of the hill for the mahamastak­abhisheka—the grand anointing of the ancient Gomateshwara statue that takes place every 12 years. Three mon­ths shy of 85, he made the gritty reso­lve to tackle the steep climb of 600-odd rock-hewn steps on foot, refusing to be carried up in a doli.

Last Friday, as Gowda celebrated his 85th birthday, his son H.D. Kumaraswamy was fighting tooth and nail to ascend on to the chair of the chief minister—12 years after he assumed that post. Karnata­ka’s first political family from Haradana­halli village—the H in their initials—was now back at the forefront of the state’s power game, and Gowda, suddenly, once again in the reckoning for the 2019 political equations at the national level.