Tawang, home to the Monpa tribe whose paper-making tradition goes back 1,000 years, is being heavily built up today. Can this little hill-town save its heritage? 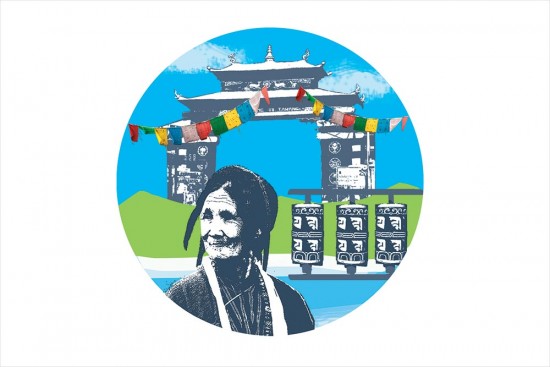 My most vivid memory of Tawang is golden fields of paddy speckled with pink and red cosmos flowers. This charming little hill-town amidst the Himalayas on the western end of Arunachal Pradesh is home to the Monpa tribe, whose paper-making tradition goes back 1,000 years. Mon Shugu (Monpa paper) was used in Buddhist monasteries not just around Tawang, but in Tibet, Bhutan, China and Japan. The naturally coarse fibre is used in scriptures, manuscripts, prayer flags and flag poles that line the mountain ridges. Tawang here is better known as Mon—an archaic Tibetan word for a low-lying region with sweeping vistas and dense forests. Within these dense coniferous forests are monasteries and temples, sacred sites and Buddhist relics, mysticism and common sense.

Tawang is being heavily built up today. Power lobbies are keeping score, hydelpower projects are waiting round the corner and anti-dam activists are consistently facing the state’s ire. Will they inundate the centuries-old sacred sites and faith outcroppings? What about the after-death tribal ceremonies tied to these sites? Will the sunlight washing over Tawang’s mountains, meadows and sky, meshed like an exquisite tapestry of infinitesimal details remain the same? What about the intentional process art of the Monpa tribe and their daily lives? The way they watch over their sacred groves, whisper secrets into ancient trees, line their verandahs and shop-fronts with seasonal blossoms, the hospitality they extend to strangers and the clear Ara alcoholic beverage they make from high-altitude barley.

It’s hard to imagine the devastation of a tribal culture by invasive development projects. Construction activities have swamped the busy town centre. Hotels are coming up swiftly and snooker bars have mushroomed at street corners. Locals say the mountains could disappear from plain-sight in a few years. Shops, multi-storied buildings, plazas, and amphitheaters may well turn Tawang into a mucked-up Shimla. We get out of the main town and ride through the rocky mountain road on to paddy fields under a spectacular sun. Around Buddhist monument, we rest, watching the clouds drift in a clear blue sky, eating a delicious meal of yak cheese and capsicum with Tibetan bread.

Tawang monastery, which belongs to the Gelug school of Tibetan Buddhism, is perched on top of a mountain. Maroon-robed monks, Monpas from villages around Tawang, live in quarters behind it. Before dawn, they slip their robes on and walk up the cobbled-stone roads to their sacred prayer hall still shrouded in darkness. Gongs, bells and Tibetan chants herald the dawn. The cavernous inside of the monastery, the second largest in the world after Lhasa, is spectacular. There’s intricately carved artwork spread over three stories and hand-woven Tibetan carpets, murals of saints and divinities, sculptures, mandalas and paintings. A massive eight-metre high gilded statue of Buddha dominates the inner sanctum, and the alcoves unravel details of monastic life since the late 17th century.

We took the winding alleys to the quarters and speak with an 82-year-old lama. That wind-swept afternoon the lama spoke about the changes creeping into monastic life, of pressure from big businesses and political groups.

Nunnery and A Cafe

Lama Jha drove us to a nunnery up in the mountains to meet an elderly nun. She encourages young nuns to sensitise indigenous people about their Monpa heritage. At the nunnery, they read Buddhist texts and meditate. Mountain nuns have a different kind of resilience. It shows not only in their daily struggles but also in the way they respond to the shifting sands of time. They said it is what their Monpa ancestors taught them. Later, on our way back to town, we found ourselves at the Buddha Coffee House, a quaint little café perched on the edge of a hill. As the rain came down in sheets shrouding the massive Buddha statue overlooking the lush landscape, we sat in the cozy café, drinking cups of coffee. The Buddha café is popular among the army personnel patrolling the Arunachal-China border.

The lama drives us back to town closer to dusk, promising he would take us to more remote locales on our next visit. I want to do the three-hour hike to a monastery located in the deep coniferous fore­sts, known only to the monastic community. The monks take turns to regroup and refresh here, before journeying back to Tawang Monastery.

Priyadarshini Sen is an independent journalist based in Delhi