That Thing We Did

The late Habib Tanvir’s Naya Theatre is in a rut. The new order is yet to find its feet. 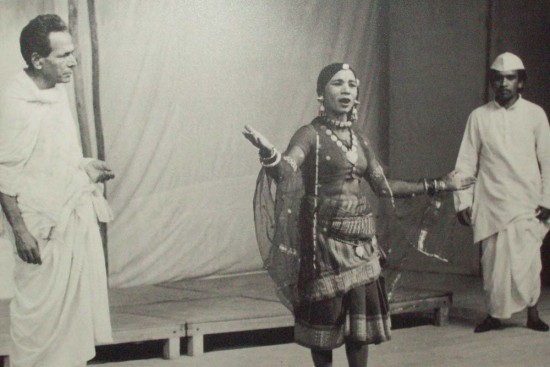 Nageen Tanvir is busy planning a musical evening in Bhopal woven around the songs written by her ‘Baba’—the legendary playwright, actor, director and poet Habib Tanvir—to mark what would have been his 92nd birthday on September 1. “There will be conversations, personal anecdotes, readings from his autobiography.” She speaks enthusiastically of what she hopes will be a “cosy and intimate” get-together of his friends and associates. Talk to her about Tanvir’s most significant legacy, the Naya Theatre group, and the enthusiasm pales a little. “Nothing much is happening. There’s nothing interesting on the horizon. It’s a lean phase that comes in every artiste’s life,” she confesses candidly. Quite evidently, the group is in the midst of turmoil and churn in the face of financial constraints and an alarming dearth of actors, productions and shows. “Bikhraav sa aa gaya hai (Things are getting scattered),” says an insider. And it has been so steadily since Tanvir’s death in 2009.

Established in 1958, Naya Theatre has been a seminal repertory for many a rea­son. “It brought out a new dramaturgi­cal language,” says writer Yogesh Trip­a­thi. Urban and rural per­­­f­ormers came tog­ether on a common plat­f­orm here. “He believed the economically poor are culturally the richest,” says Jan Natya Manch actor-director Sudhanva Deshp­ande. And so he helped bring the folk tradition of Chhattisgarhi Nacha to the mainstream. “The thought, the ideas, the style, it didn’t derive from any school but were uniquely personal,” say Dhrupad duo Umakant and Ramakant Gundecha.