The Broom Is Wielding The Stick

Anti-incumbency plagues the Congress, BJP is in disarray. Does AAP hold the key? 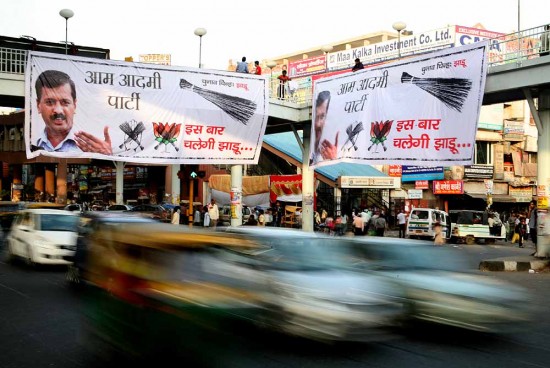 Just the other day, the stand-up in Comedy Nights with Kapil, a popular TV show, came up with this one. Playing a typical cop, Kapil complains, “These days, whenever we demand money or threaten to challan someone, they only make faces like Arvind Kejriwal.” The man who styles himself as R.K. Laxman’s Common Man come to life—though an updated, knight-like version, tilting at everything with a broom in hand—has clearly caught the popular imagination. The anti-corruption and Lokpal crusa­der, once sceptical about politics and now in the thick of it, can at least be credited with having reshaped the pol­itical discourse as his Aam Aadmi Party takes on the ruling Congress and the BJP in the coming Delhi assembly elections.

And it’s not only the atmospherics he’s changed. If one is to believe opinion pollsters, there is a significant uptick in electoral dividends for AAP—anywhere between nine and 18 seats out of Delhi’s 70. Indeed, one of them shows a 10-seat increase for AAP from August to October and a voteshare as high as 26 per cent. That’s a bit like a wildcard entrant getting into top seeds in the ini­tial rounds itself. What it will amount to will only be rev­ealed in the actual test—Kejriwal, who’s the chief ministerial candidate, is firm against any coalition (see interview).