The Commune Of Roots

The lonely, atomised farmer? There’s a new ilk out there—sharing, learning, and reaping. 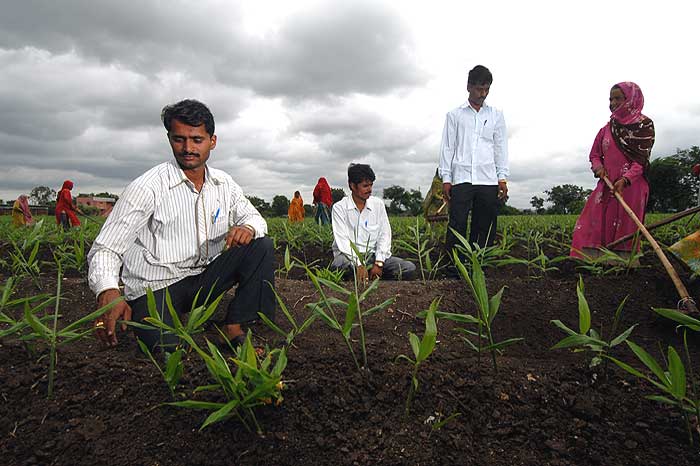 All my life I’d believed farming was the world’s most dead-end job. My grandparents on both sides were farmers in drought-prone Telangana who spent their lifetimes driving their children out of their farms. They were in search of what my grandmother memorably described as the “gentle-mental” comforts—an assured income, a home with modern amenities, a car, public school education—things one couldn’t afford by mere farming. Since then, the family resolutely turned its face from the land, taking up jobs as doctors, engineers, bankers, lawyers, moving ever outwards, from village to town to city, across the country, beyond oceans, chasing the good life.

And then, last month, I met Santosh Jadav. He looks like your average business entrepreneur from a small town: a matric pass, in his mid-thirties, dressed in sandals, trousers and a bush shirt, his BlackBerry like an extended limb. The kind of man who gets ushered straight into the bank manager’s office, reads nothing but trade journals and newspapers, and rarely speaks unless it’s shoptalk about phosphates and nitrates, hybrid seeds, drips, netajets, risbeds and, lately, biotech advances in agriculture. A well-travelled man, as comfortable riding in an airplane as on his tractor, whose annual income is in the range of Rs 70-80 lakh. A farmer from Bahirgaon village in Aurangabad district, who overturned all my city-bred assumptions about those losers with feet planted on parched fields, staring beseechingly upwards at a relentlessly cloudless sky.