The Face & The Shadow

It is Modi all the way here, saviour for Hindus, and turning Muslims against SP 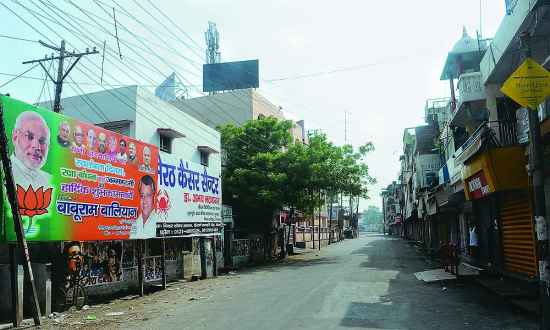 Some think he is the solution to the politics of appeasement, others see him as the ‘mass murderer’ of 2002 eyeing the land of Awadh; Narendra Modi looms larger than any other leader of his party in Uttar Pradesh. In Muzaffarnagar town, his is the most visible face on streetlight poles; his visage stares back at you from roadside hoardings and big banners; he is more ubiquitous than even SP supremo Mulayam Singh Yadav. Photos of A.B. Vajpayee, L.K. Advani, M.M. Joshi and Ashok Singhal—one of the leaders of the BJP’s Ram mandir movement in the ’90s—are reduced to thumbnails on posters displaying Modi and Amit Shah. From slogans like ‘Nayi Soch, Nayi Disha’ to greetings of the festival season, NaMo is plastered all over Muzaffarnagar and its surrounding rural areas. Other posters put up by Hindu hardliners and with themes like ‘Bharat Jago Daud’ and ‘Hindu Sansad’, with slogans like ‘Hinduon socho kal kya hoga’ and ‘Deoband Chalo’, also hint at the generally zealous political and social mood.

Modi, of course, isn’t confined to posters; he’s a living entity both for his supporters and detractors. Every Muslim—whether riot victim or shaken by the violence—blames the SP for being unable to protect them from the ideology peddled by Modi and Amit Shah. Conversely, many Hindus are assured in the knowledge that the BJP is there to “save them, and their religious and cultural values in the times of Muslim appeasement at both the Centre and the state”.  Undoubtedly, all political gain from the riots is reaped by the BJP. “This time round, Jats, Thakurs, even scheduled castes would vote for Modi, because Hindu hopes rest in Modi,” says the priest of the Durga Mata Mandir in Muzaffarnagar town. From cemeteries, tea shops and small hamlets to the Civil Lines area of Muzaffarnagar, NaMo has snaffled more space in political debates, discussions and arguments than anyone else. His is a pervasive presence.