The Footsteps Of A Famine

A visit to Bundelkhand reveals a chilling state of affairs—one wrought in equal amount by nature, state negligence and policy failure 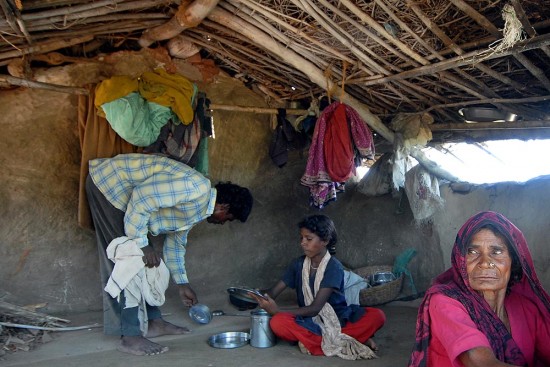 Her answer still rings in my ears. “Bhaiyya, saawan ke mahine me ek paav daal laye thhe” (Brother, we last bought 250 grams of dal during the rains). I had asked her when was the last time she cooked dal for her family. This was village Mastapur in Tikamgarh district, Madhya Pradesh, which shares its border with Uttar Prad­esh, where the pitiless terrain of the old Bundelkhand region extends. I asked this question to every woman I met during this visit. Usually there was an awkward pause followed by a smile or laughter (“don’t you know the price, babuji?”), but not a single woman claimed that her family consumed dal daily or even regularly.

I was travelling with my Swaraj Abhiyan colleagues to various villages in drought-affected Bundelkhand that lies across MP and UP, trying to listen to the footsteps of famine. This was our third visit to Bundelkhand in as many months. The first was in October, when we travelled over 4,500 km through the worst drought-affected districts of the country—from Karnataka to Haryana. Till then we had only read about the plight of farmers in Marathwada. And what we saw was depressing. But nothing had prepared us for what we encountered in Bunde­lkhand. It was not just this drought. It was the third successive crop fai­lure for this region. Drought in 2014 was followed by hailstorm during the winter crop of 2015 and then another drought in 2015. The last decade and half has seen nearly ten droughts. This drought was the proverbial last straw.