The Girl Who Has Kicked A Hornet’s Nest

She is a bit of her characters, and unlike any of them. Kangana is style and substance. And rooted, to boot. 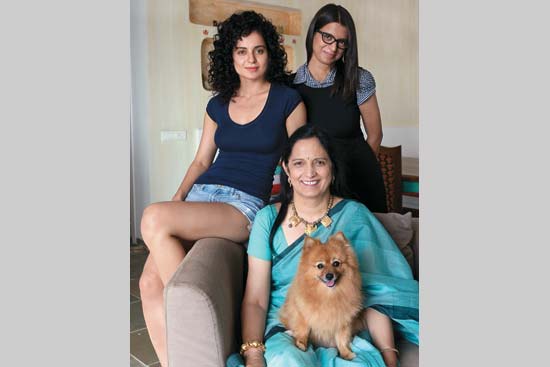 The first thing that catches your eye in Kangana Ranaut’s ruggedly designed living room in suburban Khar is its unmistakable out-of-doors feel and a big fat cushion that rests on a couch in the midst of some nondescript pillows. It stands out for a message written on it in bold: “Maybe some women aren’t meant to be tamed. Maybe they need to run free until they find someone just as wild to run with them.” It’s not hard to guess that it spells out the guiding principle of its free-spirited owner and would ring a bell with many other such ladies of the unfettered ilk.

Kangana is running free and wild at the box office at the moment. The irrepressible dash of Tanu Weds Manu Returns (TWMR) is currently the big story in Bollywood. What’s most remarkable is that she has managed to do this on her own terms. It has not just been about being the quintessential outsider in the incestuous, closed world of the Hindi film industry but also about exercising unconventional choices when it comes to the films and roles and then going ahead and turning this double drawback to her own advantage. Here is an A grade heroine who unlike Deepika, Katrina, Priyanka or Kareena doesn’t boast a Khan prop-up on her roster of films. She is yet to star with any member of the Holy Trinity. Yet with her latest film, she has delivered a mammoth Rs 38 crore all-India weekend, almost as huge as the Khans. Having amassed Rs 55 crore in five days, the film looks set to race to the cherished 100-crore mark sooner than anticipated and could well become the biggest “heroine-oriented” film in the history of Bollywood. “The film and its success have rested on her shoulder alone,” says Shailesh Kapoor, founder and CEO of media insights firm Ormax Media. Tanu Weds Manu Returns has also come like a monsoon shower in the drought-hit industry that has had only two bona fide big hits in the first half—Piku and Gabbar is Back. The 100-crore mark, which seemed so easy to reach till recen­tly, has proven elusive. Will Kangana prove the lucky charm?