The Glue Of Contradiction 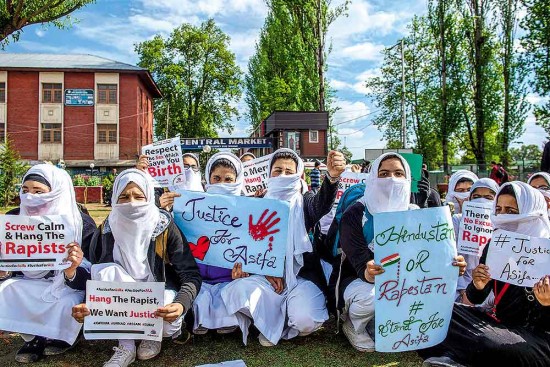 Over the past week, hundreds of students across Kashmir, inc­luding a large number of ­women, have been taking to the streets demanding justice for the eight-year-old Bakar­wal girl who was raped and murdered in Jammu’s Kathua district this January. Worried that the massive demonstrations might lead to another pro-azadi upsurge on the lines of 2016 and 2017, government forces resorted to heavy teargas shelling and pellet firing to disperse the demonstrators, leading to stone-pelting by students trying to hold their ground. Several protesters were inj­ured by pellets in their eyes.

At a loss to understand why the students are protesting, J&K government spokesperson and PDP leader Naeem Akhtar asked, “What is the occasion for protests and stone-pelting when the (Kathua) case is solved, with the accused in custody and facing trial? Shouldn’t they be attending classes instead?” Education minister Altaf Bukhari, in fact, threatened to close down educational institutions in the Valley if the students didn’t stop protesting.