The Hillsides Are Greying

Development is sinking its concrete teeth into the Himalayas—dangerously 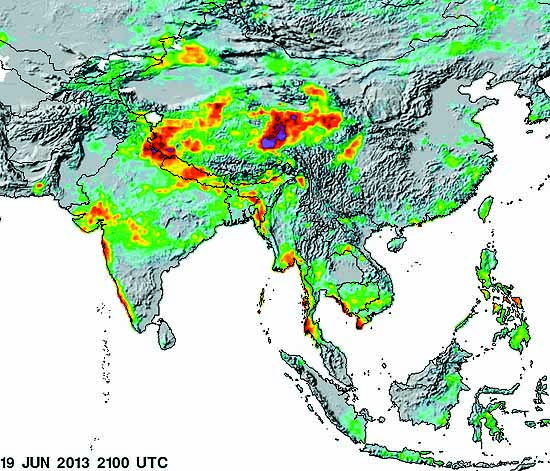 What caused this so called Himalayan tsunami and could the disaster have been averted? Experts say this kind of torrential rainfall is certainly ‘unprecedented’ but cannot be blamed on climate change, global warming or melting glaciers—not just yet. Unplanned construction on a large scale in the fragile Himalayas, already made vulnerable by rapid deforestation, was perhaps a big contributor to this disaster—one waiting to happen.

As for the unprecedented rainfall, L.S. Rathore, director-general of the Indian Meteorological Department, Delhi, says, “An unusual, rare and very unique combination of events led to this torrential downpour.” His team, he says, had correctly forecast “high to very high” rainfall in the region as early as June 14, 2013. The monsoon advanced early into the subcontinent, and this brought moisture-laden winds to the Himalayas. Simultaneously, a weather pattern from the west of India—the well-known ‘western disturbances’—closed in. The coupling of the two caused this dance of death. A whopping 440 per cent excess rainfall fell in the area in the first 18 days of June. But Rathore is wary of classifying this as an “extreme event” precipitated by climate change, as some environmentalists have been suggesting. What fuels this speculation is a landmark 2006 study published in Science by scientists from the Indian Institute of Tropical Meteorology, Pune, predicting the rise of extreme rainfall events during the monsoon as a result of the climate warming up over the decades.