Lord Jagannatha’s Ratha Yatra is one of the great ritual showpieces in Hinduism. This meticulous study lists all, but leaves out the fascinating history. 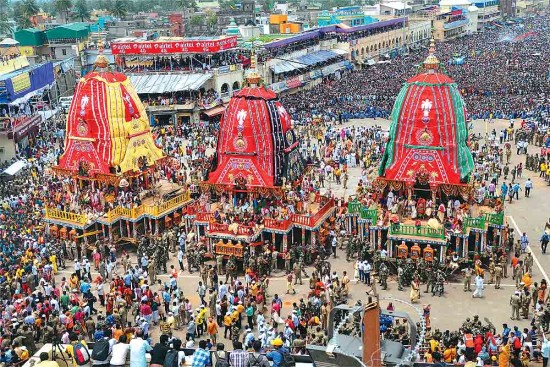 This book is all about the celebrations, legends, rituals, festivities and practices of the chariot festival of Lord Jagannatha in Puri. A coffee-table book, it is embellished with many colourful photographs on various facets of the celebrations, with suitable illustrations. Readers interested in the temple, its age-old rituals and ceremonies will feel enlightened and rewarded.

A seasoned civil servant, Subas Pani dwelt on all aspects of the Ratha Yatra of Jaga­nnatha Temple at Puri. Indeed, he has live broadcasted the Ratha Yatra over Doordarshan for two decades. Besides, his dissertation for his PhD was on medieval poet Jayadeva’s Sanskrit classic Geetagovinda and Jagannatha. The deity, add­­­ressed as Lord of the Universe, dominated the social, religious and cultural life and aspirations of the people of Orissa for ages. Cel­ebrations of the yatra in particular and other festivals showcase the culture and creativity of Orissa. The deity is believed to be omniscient, omnipresent and omnipotent. His Naba Kalebara, celebrated over four months once every 19 years, marks the rebirth of the presiding deities of the temple—Lord Jaga­nnatha, the supreme divinity, identified as Sri Krishna in black, Lord Bala­bhadra, as Balaram in white and Goddess Subhadra, their beloved sister in yellow. The deities undertake and perform their annual journey in newly built chariots: the rath of Balabhadra, called Taladhvaja, is made of 731 pieces of wood; Jaga­nn­atha’s rath Nandighosa has 742 pieces and Subhadra’s, Devadalana, has 711. Making of the chariots begin in February, four months before the Ratha Yatra. The timber for the construction of chariots is sel­ected by a team of master carpenters, procured from forests of Dasapalla in Odisha’s Nayagada district. Everything related to the yatra is preceded by elaborate rituals, presided over by priests. The book lists all the rituals in great detail.