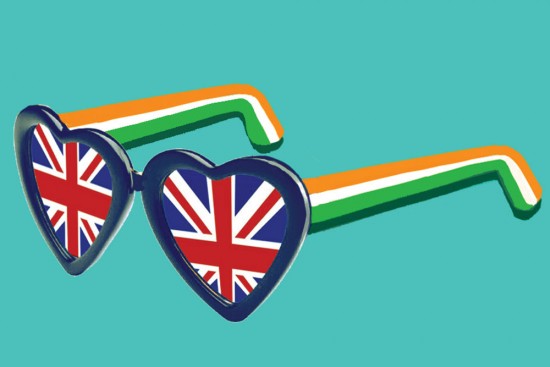 Is it plain nostalgia, a crazy gene or a weak spine that lights up our eyes on seeing the Union Jack? When Prince William and his wife Kate Middleton paid a week-long visit to India, the country’s biggest businessmen, sports and film stars deferentially queued up—and bowed and scraped before them. SRK (and SRT) gushed about how “normal, humble and gracious” they were. Anand Mah­indra lined up an award they could give start-ups. A flying skirt gave our leading pap­er the Marilyn Monroe moment it was looking for. And half of Delhi went to see a cake being cut. All this fawning suggests that, despite 69 years of freedom, we are still to get over those who subjugated us for a couple of centuries. Hundreds sacrificed their lives and much else to throw the British out, and yet we forget the fact that it was William’s great-great-great-great grandmother, Queen Victoria, who ruled over us as Empress of India. It’s tempting to blame it all on our celebrity crush. After all, we were all over Charles, but largely because of his gorgeous wife, the late Lady Diana. But that was then. What explains this, besides ‘Athithi Devobhava’?

The WillKat saga is like a Bollywood script except that our fascination with blue blood is also historical baggage. A majority of our states were ruled for centuries by royals and we grew up on stories of their extravagance and self-indulgence. Their lives and loves were the stuff of fables. Jaipur’s Gayatri Devi was embraced as one of ours, but never more so than when she was at some fancy ball in London, surrounded by fellow royals. India’s deep-seated obsession with royalty extends from clothes to style, cars to vacations, jewellery to luxury homes and the fascination with palaces as destinations for weddings. Yet, there remains a certain class of Indian society for whom royalty starts and ends with the British. Maybe it’s to do with the English language and vacations spent trundling down Oxford Street, but a young man and his wife have unwittingly held a mirror to how the cream of our society truly values democracy.