The Spine Is Intact

The army officer who has risen above odds and crippling injury 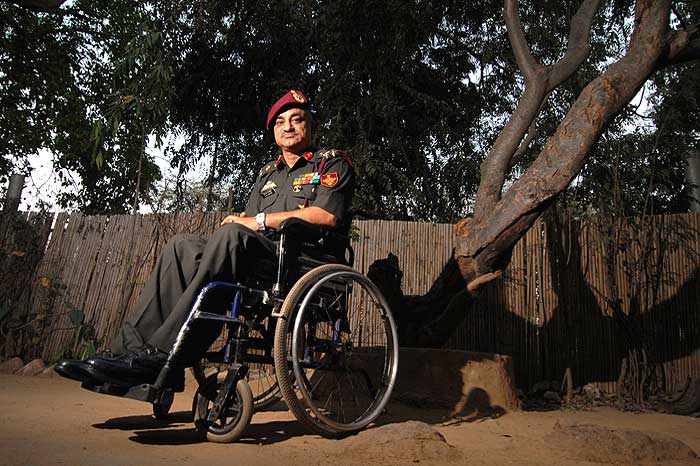 In March this year, when Outlook caught up with Brigadier Sunil Kumar Razdan, he was sitting in his garden patch, absorbed in tugging and releasing makeshift weights tied to the bark of a tree. “It’s a small pulley,” he explained, “with stones at one end, and a stupid chap at the other.” Even as you chuckled your way past his self-deprecating humour, it was clear this was a demonstration not just of an exercise routine, but of an extraordinary tenacity, worn like a humble matter of routine. It helped to explain why this brigadier had recently been approved for the rank of a major-general, making him the first wheelchair-bound officer to serve at this level in the history of the Indian army.

At the time of that meeting, seven months ago, Razdan’s fate still hung in the balance, even though he had been approved for the two-star rank. His eventual promotion depended on whether or not a vacancy arose for a major-general’s post before he retired. Unsentimentally, he explained, “I am supposed to superannuate in October 2010. If a vacancy comes before then, well and good, otherwise I just go home.” As it happened, a vacancy did open up, and the brigadier is now a major-general, but with as stoic a manner, as even a tone, as before. He says, “Any new task demands dedication and a greater excellence. If you stop looking to better yourself, you stop growing. You still need the fire in your belly.” And of that, he has always had plenty. Literally.