The Tapes No One Wants To Hear

The complaint to the PM makes explosive allegations about tapping and about how things are ‘managed’ by corporates, but the government seems to be going slow on investigating them 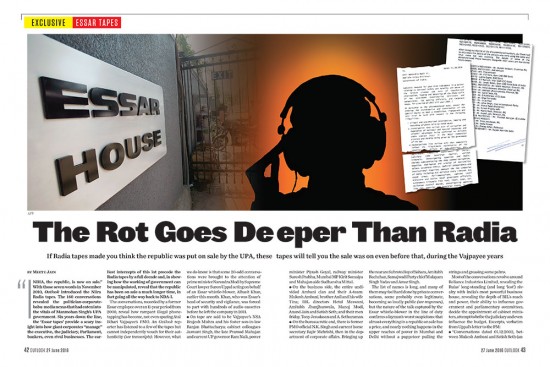 The south-westerlies hit the Kerala coast in June, but it’s only about a fortnight later that Delhiites begin to spot dark clouds furtively signing autographs over India Gate. Monsoon 2016 is still en route, but Lutyens’ Delhi—the central part of the capital that is scorned by those who can’t fathom or stand its intrigues—is already in the throes of a storm whipped up by the ‘Essar tapes’. So far, there has been ple­nty of thunder and lightning, but very little rain; but nearly everyone’s ducking and there’s plenty of perspiration.

A week after the website ‘India Samvad’—followed by Outlook and The Indian Express—showed how assorted artistes in the executive, legislature, judiciary and bureaucracy were dancing to the ringtones of the corporate world, the Narendra Modi government has moved below mandatory speed limits to get to the bottom of it. This despite India Today TV channel calling it “Bigger than Radia Tapes”. This despite Supreme Court lawyer Prashant Bhushan tweeting: “Essar tapes is the biggest expose of corporate/political corruption.”