The Trophies Of Operation Green Hunt 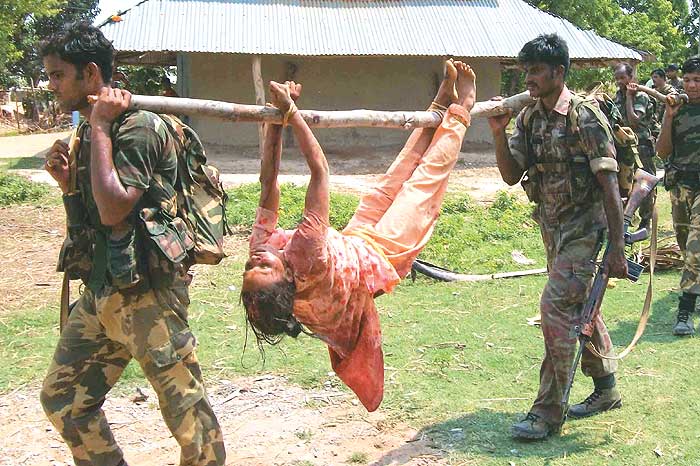 If the security forces can treat dead women like hunting trophies, not only trussing their bodies to poles, but taking pride in displaying their kill, is it surprising that their behaviour towards the living is so atrocious? After every deadly attack by the Maoists, ‘civil society actors’ are summoned by TV channels to condemn the incident, substituting moral indignation for news analysis. And yet, the same media is strangely silent on police or paramilitary atrocities against civilians. On June 9, The Hindu published stories of rapes in and around Chintalnar in Dantewada by special police officers (SPOs) of the Chhattisgarh government. To my knowledge, no one’s asked P. Chidambaram, Raman Singh or the Chhattisgarh DGP to condemn these incidents or even asked what they are going to do about it. These are people in positions of power, who are elected or paid to uphold the Constitution, and the ‘buck stops with them’, not with ordinary citizens.

If channels can run all-day programmes on justice for Ruchika Girhotra, why not for the adivasi girls who were raped and assaulted in and around Chintalnar between May 26-28? Is it because they are not middle class and their plight will not raise TRP ratings? Or because they are considered ‘collateral damage’ in the war between “India” and the “Maoists”—who, not being part of “India”, are presumably from outer space—that TV commentators advocate?