‘This Is Slavery Based On Caste’

A crusader for Dalit rights, Bezwada Wilson, on reclaiming for the Dalits a life of human dignity in a structurally apathetic society. 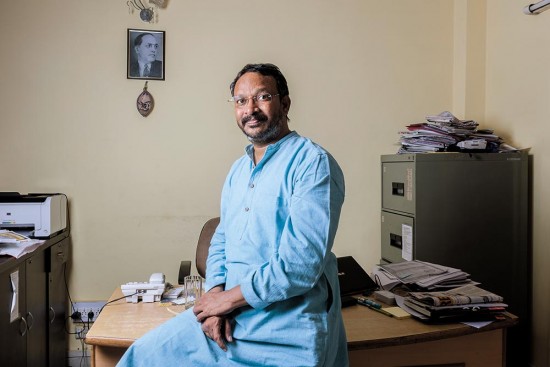 On many occasions, the Ramon Magsaysay Award has been bestowed on individuals of various ilks and ideological persuasions. For the first time, perhaps, it speaks to an issue that touches the lives of millions of people because an award for Bezwada Wilson (50) is an international acknowledgement of the cause of the people who have been forced for generations, by an inh­uman system of caste-ordained occupation, to handle the human waste of a structurally apathetic society. Before leaving for Manila to receive the award on August 31, Wilson spoke to the media about the only thing he cares for: “reclaiming for the Dalits the human dignity that is their natural birthright,” as the Ramon Magsaysay Award Foundation put it. Excerpts from the conversation Uttam Sengupta had with the national convenor of the Safai Karmachari Andolan (SKA):

Have you ever come across anyone other than Dalits engaged in manual scavenging?

Practically no one. This is a caste-based occupation. There could be one or two cases of people from the OBC category, but almost exclusively, it’s untouchables who are engaged in this unclean work. When drains get clogged or sewers are to be cleaned, then only a certain kind of people are sought out. During the tsunami, there were bodies of both human beings and animals submerged in water. But even volunteers would look back and ask for the Dalits and ‘safai karamcharis’ to do the job. It is like caste-based slavery.

What was the impact of the Supreme Court order for compensation of Rs 10 lakh to the families of those who died since 1993 while cleaning sewers?

There has been no significant headway in terms of implementation. Two years have passed since the Supreme Court order to the government to...