To Walk Past The Threatening Gaze

The Ramban reminder—Kashmiris are fed up of soldier as state 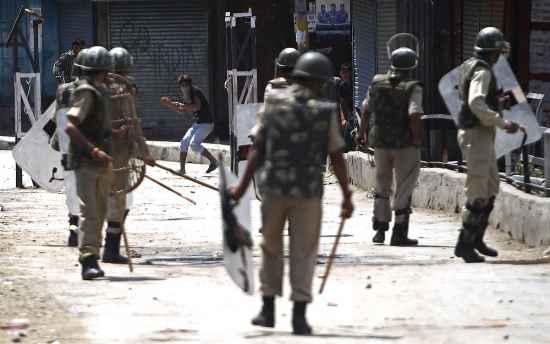 They shoot to kill in Kashmir: not to warn, not to disperse, not to police. How can they even do otherwise, the Border Security Force, who are specifically trained to preserve the borders of the nation, to fight enemies who threaten them there. At the border, those who confront them are the enemy; and they, like the Indian army, are sure of their purpose, which is to kill.

But this is Kashmir, and the BSF do not man the border—they are part of the relentless internal control mechanisms that keep in check civ­ilians, citizens of the state of Jammu and Kashmir and thus, ostensibly, of India. We might think citizens everywh­ere have the right to protest to express their anger at the way they are treated by paramilitaries whose attitude is that of an occupying army. But not in Kashmir (and not in Manipur and Assam and Chhatt­isgarh and Niyamgiri...the list is long). In Kashmir, elements of the military apparatus act as they deem fit, as for them Kas­h­miris are but subjects of the Indian state, and in the name of surveillance and security they can act with whatever violence they deem appropriate. And why would they not, for their violent actions are protected by the Armed Forces Special Powers Act, promulgated in 1990, as well as other acts that apply to ‘disturbed’ areas, and they know that no military man has been punished for any crime committed in Kashmir.