BJP's leader of opposition breaks her silence on her party's Karnataka chief minister, and speaks on a wide range of issues 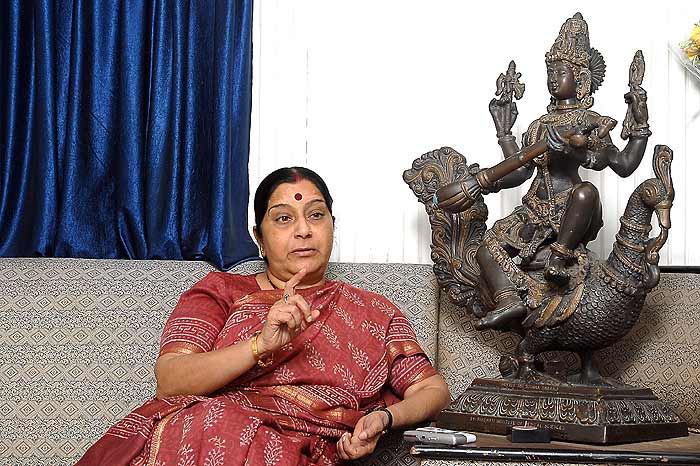 She is often accused of not supporting her party’s Karnataka chief minister B.S. Yediyurappa and instead shielding the tainted and rebellious Bellary brothers. Sushma Swaraj of the BJP, leader of the opposition in the Lok Sabha, has finally broken her silence on the issue. She says she had nothing to do with the political elevation of the Bellary brothers. Instead, she says, it was Arun Jaitley, her party colleague and leader of the opposition in the Rajya Sabha, who was responsible for getting the Bellary brothers ministerial berths in the BJP’s first regime in Karnataka. Jaitley and Rajnath Singh, then BJP president, she says, pushed her to speak to the Reddys to help solve the crisis in 2009, when the Yediyurappa government was threatend by the brothers’ rebellion. It was the collective wisdom of these two leaders, and compulsions best known to them, that led to the Bellary brothers being favoured. Sushma spoke to Prarthna Gahilote on a wide range of issues.

The Karnataka crisis seems to have been sorted out for the moment. But when the BJP raises the corruption issue, many wonder why you haven't taken action against Yediyurappa, who faces corruption allegations