The recent attacks on the minority Hindu community in Bangladesh expose the fault lines in India's neighbouring country. 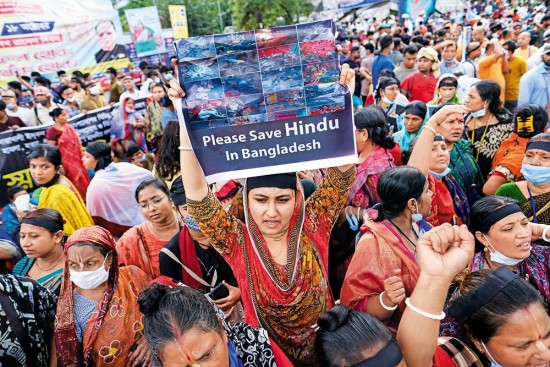 Critics of Bangladesh Prime Minister Sheikh Hasina list a litany of faults.  Many say she is autocratic; the opposition alleges that their cadres are arrested on the flimsiest of charges; journalists who criticise the gov­­e­rnment claim she’s intolerant of dissent. But, for all that, her commitment to secular principles has never been in doubt. However, the recent attacks on minority Hindus across the country—destruction of temples, Durga Puja pandals, Hindu homes and rioting—and the government’s defusing of the crisis provide an interesting juncture to examine the socio-political rift within Bangladesh.

Hasina’s father, Sheikh Mujib-ur-Rahman, fought for equality and democracy and broke away from Pakistan—something that a section in Bangladesh finds hard to accept even fifty years later. Indeed, Bangladeshi politics continues to revolve around what happened during the war of independence. The Awami League, the party founded by Sheikh Mujib, stands for a modern, secular state. Elections have proven that a significant section of educated Bangladeshis support the Awami League’s ideology, which is steeped in cultural and linguistic nationalism.

But there lies a hardened opposition. It is spearheaded by religious groups like the Jamaat, which are bitterly opposed to secularism and want Bangla­desh to become an Islamic state subject to Sharia laws. The Jamaat bitterly opposed the break from Pakistan and is stridently anti-India.

Furthermore, the Jamaat acted like fifth colum­nists during the war of independence in 1971 and colluded with the Pakistani army when it cracked down on freedom fighters and during the subsequent genocide. Many Jamaat activists actively participated in the infamous murder of intellectuals in the Dhaka university campus, and are allegedly responsible for massacres and torture of civilians—hideous outrages like large-scale rape and murder—supporting the freedom movement. 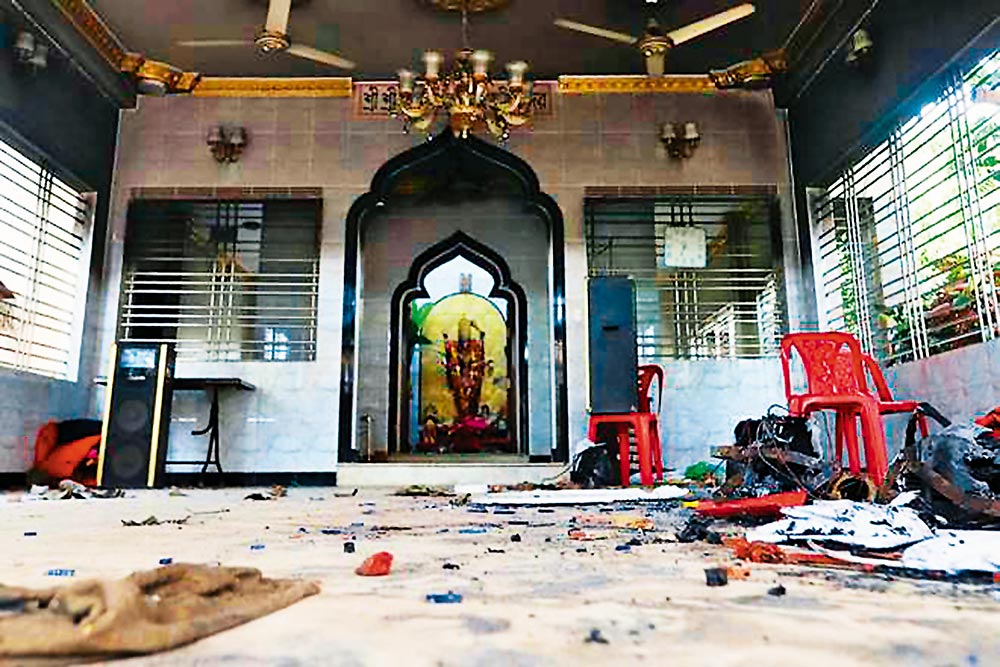 A vandalised temple in Comilla

In 2013, at least three Jamaat leaders implicated in some of the worst atrocities in 1971 were tried and sent to the gallows. The hangings deepened the divisions in a polarised society. The fact that many critics felt that the elderly men had not got a fair trial rankled many. Yet Awami supporters were pleased that those responsible for crimes against humanity were brought to justice at last.

The rift between Islamists and the Awami League has grown as the government continues to crack down on the opposition. The Jamaat, once coalition partner of Khaleda Zia’s Bangladesh Nationalist Party (BNP), was banned by the Supreme Court from taking part in elections in 2013. Zia, leader of the main opposition BNP, has been kept busy fending off corruption cases. Her son and political heir is in exile in the UK and the opposition is in tatters. Yet, while the Jamaat is singled out for action, other outfits such as Hef­a­zat-e-Islam and Islam Andolan Bangladesh, which follow a similar Islamist ideology, are allo­wed to operate freely for political considerations.

The opposition BNP blames the government for the communal flare-up. PM hasina promises action and arrests are made. but in the past such cases have fizzled out.

The fact that the Bangladesh economy is thriving has added to Sheikh Hasina’s image and credibility. In her earlier years, Hasina was often derided by the BNP and Jamaat as an Indian stooge for her close links with New Delhi.

“In Bangladesh, the majority is non-communal but elements like the Jamaat have not reconciled to historical reality. Pakistan has also not given up. Since 1947, 1971, and to this day, they want an exodus of Hindus from Bangladesh and stir the communal cauldron. They want to break the strong ties between India and Bangladesh and the Jamaat does their bidding,’’ says Veena Sikri, former Indian envoy to Dhaka.

“We must appreciate the people of Bangladesh for coming out in solidarity with the victims [of the recent communal riots] and demanding act­ion against those responsible. People are wary that no action is taken. It is time for the government to also introspect on why minorities, whether Hindus or Buddhists, are frequently under attack and take strong action,’’ Sikri adds.

Despite tremendous economic progress under Sheikh Hasina, there does exist a deep fissure in society. Perhaps because of her uncompromising stand on secularism, action against the opposition as well as the general global swing towards narrow, conservative nationalism, Islamic ideology, including extremist Islam, is expanding in Bangladesh. The Awami League government den­ies the mushrooming of global jehadi forces in Bangladesh, yet attacks on secular writers, bloggers and artists took place under Hasina’s watch.

Opposition BNP MP Shama Obaidullah blames the government for the current communal flare-up. “It is the failure of the government and the local administration. In Bangladesh, we have always celebrated all festivals; this is the first time such attacks have happened. The district administration from the DC, SP, OC have all failed to protect the minorities. In some cases, officials arr­ived 33 hours later at the scene of the incident. The BNP is demanding a thorough investigation by an impartial inquiry. Hindus are out in the streets demanding this and we fully support them,’’ she says, adding that the BNP sent out teams to find out the ground situation.

The riots started on October 13, when a clip of the Holy Koran was shown at the feet of a Hindu idol at a Durga Puja celebration in the eastern district of Comilla. The clip went viral and led to angry mobs attacking  temples, setting fire to homes, and destroying Hindu businesses. Five people were killed. PM Hasina promised ­action. Many cases have been filed, and the main culprit apprehended. The question is, will the ­investigators carry through to the end and justice be served. In the past, cases against unknown persons had dragged on, before being dropped.

“The government blames the BNP for every incident. Already, the police are going after our cadres and naming them in FIRs,” says Obaidullah. “The Awami League is preparing for the 2023 elections. The message being sent out and mainly to India is that only Sheikh Hasina can protect minorities in Bangladesh.”

According to a human rights organisation, Ain o Salish Kendra (ASK), at least 3,710 attacks against the Hindu community have been registered ­bet­ween January 2013 and September 2021. “The att­acks were not sporadic, on the spur of the mom­ent. They were orchestrated, highly political and ideological. I cannot point a finger at anyone without more details. The administration has not been up to the mark. But Sheikh Hasina herself is secular and wants to take strong action. Problem is that has not filtered down. Community relations are breaking down and that is a major concern in any society,’’ says Shantanu Majumdar, professor in the department of political science, Dhaka University. “There is a sense of insecurity among minorities here,” he finally says.

Of course, it is imperative for Indian states, especially those bordering Bangladesh, to ­rem­ain vigilant, ensure there are no retaliatory ­att­acks and that deep communal fault-lines are kept in check. Failing this, it would validate a fresh barrage against Hindus. Then, those ­res­ponsible for the attacks in Bangladesh will have the last laugh.