The Kabul University attack convulsed the body and mind of an Afghan woman. What remains are shards of her dreams. 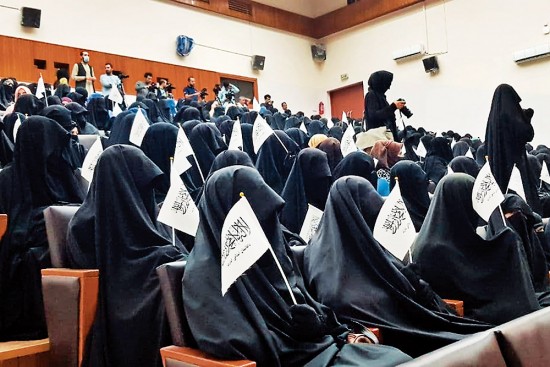 I didn’t cry for at least a year. Yes, I count every day. However much I tried, not a single drop came out of my eyes. But now I cry often. It changed more than two months ago, when the Taliban occupied my Kabuljan. My hands shake and my throat dries up when I think about the day that changed my life irrevocably. My name is Maryam Karimi and I am a 21-year-old Afghan woman.

It was a sunlit winter’s morning, a Monday last November. My younger brother and I had had an early morning breakfast and left for classes from our aunt’s home in Jangalak. We took an old yellow Corolla taxi that, after snaking through Kabul’s gridlocked traffic and crowded bazaars reached Kabul University. Like any normal day, the campus swarmed with students. Some soaked in the sun; others were busy chatting; the sound of laughter was carried by a mild breeze. I walked tow­ards the white building of The National Legal Training Centre of Afghanistan, then took the stairs to the second floor and walked towards my classroom. It has half a dozen windows, a long whiteboard and chairs for students. I enjoy sitting by a window, for the sight and the fresh air.

The period was for management of organisation development and most of my classmates were either scrolling social media posts on their smartphones, or chatting away, while waiting for our lecturer.

Founded in 1931, Kabul University is Afghanistan’s premier varsity. Its vast and verdant campus is ringed with trees. At least 25,000 students are enrolled in the university. Thousands of them were present on campus on November 2, 2020. No grave portent cautioned them about what was to follow. My friends decided to check the previous semester’s results after our class. But the piercing sound of bullets intervened.

I first thought the sound came from outside. But as it drew closer, we realised we didn’t have enough time.

According to some, the attackers were on campus, but some believe they entered from the northern gate. Then they ran in, firing indiscriminately, throwing bombs, scattering hundreds of terrified students. Most fled inside, some hid behind trees, some tried to climb over the boundary walls. The attack clearly indicated a lack of coordination amongst security wings, a failure of intelligence and the utter neglect of our government. The building I was in was within a walking distance from the northern gate and it didn’t take much time for the militants to find us.

The sound of gunfire and explosions made us frantic with fear; for some time during the chaos, I could only hear the loud thump of my bursting heart. We started crying and recited the Kalima.

It was such a traumatic experience that I still need to pause and untangle my emotions to complete my sentences. The violence, bloodbath and des­pair have made brittle the words of Afghans.

In a country where almost everyone has lost someone she knew, violent death walks behind us, sometimes beside us, every day. People just vanish in an explosion, sometimes families never find the bodies of their loved ones. Afghans are only safe in their cemeteries; many don’t even get that repose.

While on the second floor we looked for a way to escape, gunmen had entered a first floor classr­oom where students didn’t get the time to escape. They had locked themselves in but a door with its upper half made of glass has little def­ence from AK47 bullets and grenades. Meta­pho­rically, as it seems now, that door with its fac­ade of strength represents the previous Afghan gov­ernment, with all its false promises of security and prosperity. Today, we know we are on our own.

I imagine the moments before my classmates died on the first floor—did they think about calling their loved ones one last time? Maybe they cried for mercy. This is what I was thinking then. I ima­gine their pale faces, their dearest wishes and plans for the future gone in seconds. The attackers smashed the door and fired at the mass of students, killing most of them. Later, 13 police off­icers, including a head of the police intelligence department were arrested for ‘negligence’. It cost the life of 18 students. Ten were female students.

In a nation where everyone has lost someone she knew, violent death walks behind us, often beside us. The despair has made brittle the words of Afghans.

In our panicked room, a classmate broke a windowpane and some students jumped outside, one after the other, to the other side of the building. An Islamic Studies lecturer ran in and jumped out too. Death was just seconds away. But I was afraid to jump from that height. It was too high for me. I froze and did a hurried risk assessment, then knew that if I didn’t jump now, I would surely lose my life. I uttered Bismillah and jumped on the concrete floor. A shattering pain erupted in my left leg, which was bent all awry after I hit the gro­und. I was screaming; my head, hands and face bruised and bleeding, but I still tried to run. But I couldn’t. I tried to walk, but fell. I crawled a few feet and tried to stand up, but collapsed again. Lying there, I saw a gunman at a window, shooting at students on the quad below. Several of my frie­nds were shot dead before my eyes. Maybe that was the trigger point—my last chance of survival as bullets whizzed past me. Ignoring the searing pain, I ran—without shoes, my clothes soaked in blood and my dreams scattered to the winds.

I finally crossed the fatal range of the gunman’s weapon, and kept running towards the boundary wall where other students had gathered to jump to the other side. With the help of others, I jumped on the street outside, hurting my knees and head again. A friend of mine found a taxi and I rushed home.

Images shared on social media showed a scene of bloody massacre in our classrooms. Mangled bodies of my friends lay in pools of blood. And blood-spattered books, bags, bullet-riddled walls, shattered glass and broken chairs. One picture showed a dead girl student lying on the floor; her face rested on a red notebook, one hand clutched a pen. She was my classmate. Thus ended the lives of youngsters who would have served their country. Many were first-generation university students. The shattered whiteboard stood as a witness to broken dreams. This land hasn’t tired of spilling the blood of its young and swallowing their caskets every day.

Initially, I was admitted for over ten days in a hospital and after the rounds of dozens of hospitals and x-rays and MRIs, doctors found that my pelvis and spinal cord was fractured. There was inflammation in my kidneys, my hands and legs were swollen, I also had head injuries. I can’t walk anymore and have been in a wheelchair since then, dependent on others’ empathy. The incident on that day affected my balance—I am unable to analyse a situation properly and can’t concentrate on my studies. The shock has made me numb to any feelings. I have to wear a waist belt constantly. But physical injuries can be healed. Mental injuries are often beyond repair. 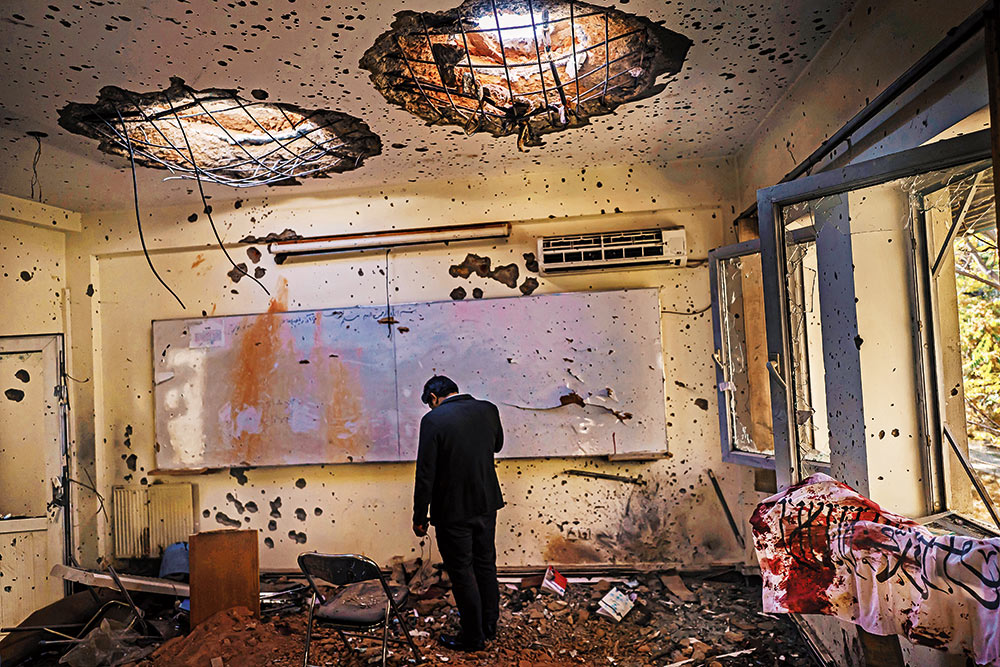 The blood-spattered ruins of a classroom after the November 2, 2020 attack on Kabul University

The bloodshed and violence have psychologically injured Afghans. We are born in conflict; we don’t know what peace looks like. The attack has robbed me of everything. My dignity, my dreams, my passion—all gone. For months, I had to be hospitalised due to shortness of breath brought upon by panic attacks. I had flashbacks, I couldn’t sleep at night. Doctors suggested a visit to India for better treatment. I have been to India and was recovering. Psychologists suggested to my father that I shouldn’t be taken back to Afghanistan. As I boarded the flight from New Delhi to Kabul, fear engulfed me and the attacks returned. But my father is just a municipality employee who can’t afford the expenses of my treatment in India. So he brought me back.

My panic and anxiety attacks are back. I cannot sleep for days and cry most of the time. I can’t ever go back to university. this group of the Taliban are the same.

After my return, my chronic, debilitating  headache, anxiety and panic attacks returned too. We live in a very small house and the sound of television, people, and other sounds incr­eases anxiety. When my younger brother plays shooting games on his phone, my body temperature goes up. News of other attacks in Afghanistan triggers panic attacks.

I feel I am not that strong girl who wanted to be an ambassador and serve her country. My fut­ure seems uncertain. I regularly think of suicide. Its seems the only relief. I loved my life once. I was working hard to improve it. I don’t want to be in this wheelchair for the rest of my life. I shiver when I think of terrorists who will come back and kill me. Do I have to live with this fear all my life? Do I deserve this?

My health had improved somewhat in the past few months. I was trying to focus on my studies. But with the arrival of the Taliban in Kabul, my mental health has deteriorated again. I am afraid of my life as I have blamed the Taliban for the university attack. My panic attacks, flashbacks and anxiety are back. I cannot sleep for days. I can’t ever go back to university too. This group of the Taliban is just the same.

I am caged inside home like a prisoner. On normal days my mother or brother would take me for a stroll in the evening but that has stopped. I couldn’t shed a single tear for nine months; now I cry most of the time. I am slowly losing hope in life, in people around me, in this world.

In a war-torn country, death is a statistic where the wounded don’t get a mention. They are the forgotten ones. Like I have been forgotten.

(This appeared in the print edition as "Blood, Tears & Lost Hope")

(Name has been changed to protect identity.  As told to Aaquib Khan.)

By Maryam Karimi in Kabul