Threat of bankruptcy has pushed the President and Prime Minister to a corner and Sri Lanka towards an unprecedented financial crisis. 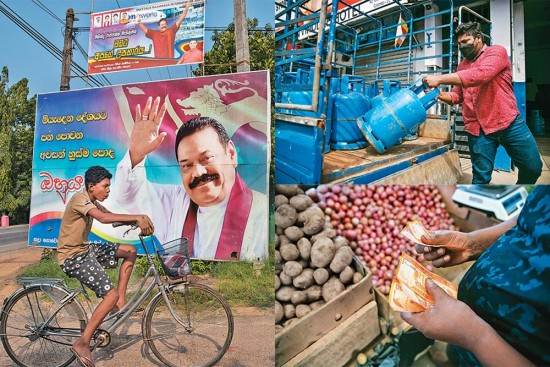 Sri Lanka’s financial crisis has shattered the image of the Rajapaksa brothers, one of whom is the Prime Minister, while the other is the President of the country. Adulation for their strongmen personae had reached a peak since the 2009 military campaign wiped out the LTTE and its reclusive chief Velupillai Prabhakaran. The Rajapaksas were hailed as heroes and adored by the Sinhala-Buddhist masses for ending an ethnic war that had persisted for over two decades.

Mahinda Rajapaksa, the then President (and current PM) was compared to Sinhala historical icon Dutugamunu, the ancient king of Anurad­hapura, who ruled between 161-137 BC. Dutug­amunu is the quintessential Sinhala hero who had defeated an invading Indian army led by Chola prince Elara. As defence secretary during the campaign, his brother, current President Gotabaya, was equally admired—credited to have played a huge part in the military campaign that eliminated LTTE.

So, it was no surprise that in the 2019 presidential elections and the 2020 parliamentary polls, the Rajapaksa brothers won with overwhelming majorities. Most Sinhalese were ready to forgive the strong-arm authoritative tendency of the Rajapaksas, which brooked no opposition, threw critics into prison and ruled with an iron hand. Human rights groups in Sri Lanka and abroad slammed the government, but no one paid attention to what the do-gooders had to say.

Yet today there is anger in the streets. The halo around the Rajapaksas has disappeared. The forex crunch has led to cutting down of essentials imp­orts, including food items, petroleum, cooking gas, sugar, cement, and is now likely to affect medicine supply. This had led to soaring prices and long queues for milk powder. Electricity is now being rationed as the Ceylon Electricity Board is una­­­­ble to buy fuel oil for its power stations. Hour-long power cuts have begun across the island. The shortages have led to rationing of many everyday staples. Before New Year, the government managed to increase reserves to US $3.1 billion through currency swap arrangements, but its ext­ernal debts are said to be as high as US $45 billion. By January 18, the government managed to pay out a US $500 million international sovereign bond, but the crisis is by no means over yet.

The rajapaksa brothers were adored for their strongmen personae, credited with wiping out the LTTE and its reclusive chief Velupillai Prabhakaran.

While the poor have been hit hardest, with food inflation at 22.1 last month, every segment is feeling the pinch. Take the case of Gehard Mendis, a well-to-do techie who runs a clutch of high-tech companies in Colombo. “My son is appearing for his LLB from the University of London. He has to pay his semester fees online. For this, he was using a commercial bank international VISA debit card. Since last October, the card is being rejected for international payments due to the forex crisis, alt­hough he has used it in the past without any problem. It’s a problem around 40 other students in his batch are also facing.” But for the common man, the problem is how to make ends meet. Those lucky enough to have a job, find it difficult to manage with the salary, considering the massive inflation.

London’s Guardian newspaper spoke to Anurudda Paranagama, a chauffeur in Colombo, who took on a second job to pay for rising food costs and cover the loan on his car, but it was not enough. “It is very difficult for me to repay the loan. After paying electricity and water bills and spending on food, there is no money left,” he said, adding that his family now eats two meals a day instead of three. He told the Guardian that his village grocer was dividing 1 kg packets of milk powder into packs of 100g, because his customers could not afford the whole packet. “We now buy 100g of beans when we used to buy 1 kg for the week,” said Paranagama.

Much of Sri Lanka’s current financial downturn has to do with the pandemic as well as heavy ext­ernal borrowings, principally from China. Mahi­nda’s second term in office saw him turn more and more to China for support. Sri Lanka signed in to President Xi Jinping’s ambitious Belt and Road Initiative. China funded massive infrastructure projects in the island nation. Hambantota port was built by China in Rajapaksa’s family bastion of southern Sri Lanka. Unable to pay its debts, Sri Lanka had to hand over the port to China on a 99-year lease in 2017. This was during the time when Ranil Wickremasinghe was PM, and was criticised by the family. However, the inv­itation to China was originally extended by Mahinda, so he is responsible for landing the country in the debt trap. The Chinese BRI, dep­endent on the debt-to-equity swap, has been criticised by the US and the rest of the world for landing developing nations in deadly debt traps.

While Sri Lanka’s external debts kept mounting, the Covid pandemic dealt a death blow to the economy. The US $4.4 billion tourism industry dried up since 2020, leading to closures of smaller hotels, lay-offs in the bigger establishments and restaurants, and packing up of small, family-run outlets and those selling tourist paraphernalia.

To add to people’s woes, President Gotabaya dec­ided in April 2021 that Sri Lanka would ban all chemical fertilisers and be the first country in the world to go completely organic. The idea was great, but with agriculture the mainstay of nearly 70 per cent of the people, the overnight change without careful planning backfired. Gotabaya said he took the decision because of health considerations, but also spoke of the need to cut imports due to the economic crisis.

At the time, W.A. Wijewardena, a former central bank deputy governor, was reported in the local press as having claimed that the President’s overnight organic leap was “a dream with unimaginable social, political and economic costs”. The isla­nd’s US $1.5 billion tea industry that employs a million people was also hard-hit by the fertiliser ban. Got­abaya had to withdraw the ban.

“There here has been ad-hoc policy planning and reversal of policy decisions from this government, related to several areas including the fertiliser ban in 2021, which has had serious imp­l­i­cations on food security and livelihoods. The scarcity of essential items and rising cost of living have had a direct bearing on people across Sri Lanka, with the popularity of this government hitting an all-time low,” said Bavani Fonseka, senior researcher with the Colombo-based Centre for Policy Alternatives.

She hit out at the Rajapaksas for failing to provide leadership. “The power outages and fuel shortages are examples of the economic crisis and disastrous policies of Gotabaya’s regime. The next few weeks and months will be a critical time in Sri Lanka, with no indicator whether the government will finally go to the IMF or continue to explore piecemeal efforts that are not sustainable in the long term.” She added, “In September 2021, the government imposed Emergency to address iss­ues of supplying essential items, with a former military official appointed to lead the initiative, compounding concerns of the authoritarian and militarised nature of governance. The decision was soon revoked with no public comment made on the policy U-turn.”

There are fears that Sri Lanka may default on its US $26 billion foreign debt after the rapid depletion of its forex reserves. Colombo can go for an IMF bailout, but this comes with stringent clauses attached. Whether China bails out the Rajapaksas remains to be seen.

(This appeared in the print edition as "Brothers Grim")