The Biden-Harris administration is serious because India is at the heart of the US response to its peer competition with China. 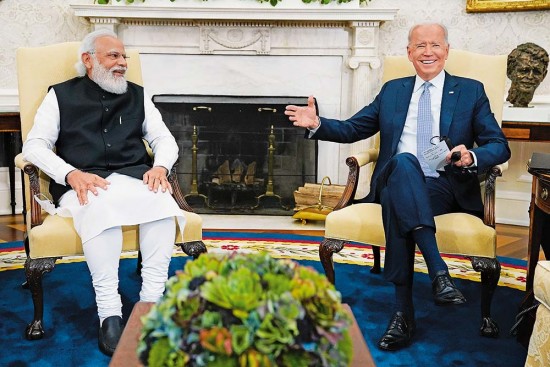 Minister Naren­dra Modi’s recent trip to the United States should reassure India of the depth of its ties with America. Leaders of both major American parties reiterated their commitment to maintaining what President Obama had described as “the partnership of the 21st century”. But beyond the bonhomie as well as the imagery of the first in-person summit of Quad leaders, India and the US must remain clear-eyed about the challenges ahead.

President Biden may not have offered effusive personal praise that characterised former president Trump’s interaction with Modi. But relations between nations are never solely based on personal bonds or ideological affinity between leaders. India and America have shared interests that are recognised by both Republicans and Democrats in the US.

Contrary to fears of some Indian commentators about Democrats taking over the White House last year, I had written in November 2020 that a Biden-Harris administration will lead to substance taking priority over rhetoric and that would be better for the India-US strategic partnership than the ‘Howdy Modi’ theatre of the Trump years.

As a long-time admirer and friend of India, Biden and his adv­isors have focused on India since the beginning. India is at the heart of the US response to its peer competition with China. It is central to America’s Indo-Pacific strategy and the Quad, the grouping of Australia, India, Japan and the US that is expected to provide a counterweight to China’s rise.

Bilateral relations cover diverse areas of cooperation, from health and pandemic response to climate change and strategic issues. Both the US-India bilateral summit and the Quad summit that took place during Modi’s Washington visit, showed the diverse areas in which both countries cooperate.

India and the United States were never allies during the Cold War, but they have built an enduring partnership over the last three decades. The relationship is anchored by shared values and interests. Both countries believe in democratic norms and a rules-based international order, twin concepts at the heart of the US Indo-Pacific strategy and the Quad.

President’s Biden speech at the Quad summit and the joint statement issued after the US-India bilateral meeting referred to “forging” deeper relations between “two leading Indo-Pacific powers” that “are committed to values of freedom, pluralism, openness, and respect for human rights”. For Was­h­ing­ton, especially the Biden administration, democratic countries are the ideal counterfoil to an autocratic Chinese led world order. India, the world’s largest democracy, is exp­ected to be America’s partner in this quest.

India is a ‘major defense partner’ of the US and has signed all four defense enabling agreements that US defense partners normally sign for exchange of military intelligence and technology. This has enabled information sharing, bilateral and multilateral military exercises, maritime security cooperation, liaison officer exchanges and logistical cooperation.

Homeland security and counter terrorism cooperation between India and the US is only two decades old. Yet, they now work together on screening of terrorists, dealing with cyber threats from terror groups, intelligence and information sharing, aviation security and capacity building. This collaboration was visible all through August, when India as president of the UN Security Council held several meetings on Afghanistan. It was also reflected in the specific references in their joint statement to the need for a common strategy in Afghanistan and combating terrorism in South Asia.

The United States and other partners would like India to inv­est more in military modernisation and projecting power in the Indo-Pacific. Over the last two decades, India has purchased over $20 billion in defense equipment from the US, compared to almost nothing in 2008. The Indian Air Force operates the second-largest C-17 fleet in the world next to the United States and the Indian Navy is the second-largest operator of P-8I Poseidon maritime patrol aircraft in the world.

Yet, India’s preference for multiple suppliers for defense equipment has the potential to create friction with the US. Washington is aware of India’s historical defense ties with Russia. However, India’s purchase of Russia’s S-400 missile system in 2018 goes against the 2017 Countering America’s Adversaries Through Sanctions Act (CAATSA), whose aim was to deter friendly countries from purchasing equipment from Russia. Delhi hopes its strong ties with Washington will ensure a national security waiver to CAATSA, but the US has yet to make a firm commitment in that regard.

The US has over the years shown an interest in coproduction in the defense realm, but India has been reluctant or taken too long to move ahead. The best example here is the US-India Defense Technology and Trade Initiative (DTTI). A decade ago, the two countries had spoken of working together on jet engine technology and next generation aircraft carriers. But little progress was made in either field. Now, India and the US plan to collaborate on a $22 million project to co-develop air-launched unmanned aerial vehicles (drones).

In the economic and commercial fields, bilateral trade in goods and services stands at $152 billion, with America being India’s largest trading partner. But the two countries are a long way off from the goal for $500 billion in bilateral trade that had been hoped for by 2020.

India’s economy has slowed down over the last decade and the country has turned more protectionist. India’s restrictive data privacy rules, restrictions on competition within the Indian market and the use of regulation to benefit indigenous companies will only further impair the country’s growth and limit its potential within the global economy.

The US Indo-Pacific strategy, the Quad statements, and US-India joint statements talk about India’s role in becoming part of global supply chains and collaborate on emerging and critical technologies. To do that, Delhi needs to walk the talk and be more open to trade, more receptive to Foreign Direct Investment and be more willing to roll back its digital privacy rules. In 2021, nine years after India imposed retrospective taxation, a law that taxed fims retroacti­vely, the law was finally revoked. This was after India lost cases, and was fined, by all courts and at international fora. The lesson to be learned is to change problematic policies in advance, something India’s bureaucracy is often reluctant to do.

The Biden administration is unlikely to use trade as a transactional tool, unlike the Trump administration. But it is equally unlikely to give India a complete pass on restrictive trade and investment policies. Instead, it will most likely use institutional arrangements like the Trade Policy Forum, the US-India Commercial Dialogue, and the CEO Forum to address these concerns.

If trade and level access to the Indian market are important for the US, the issue of skilled immigration is important for India. While the Biden administration has rolled back some of the Covid and Trump era restrictions on students and work visas, the broader issue of raising America’s cap for work visas and legal permanent residents (green cards) remains. India views immigration into the US as one of economic foreign policy. But for Washington, it is an issue of domestic politics, making it less easy to resolve through leaders’ dialogue.

These outstanding matters will continue to be on the agenda for future dialogue between Indian and American officials. But Biden has reaffirmed that America’s global interests, framed currently by peer competition with China, make India a critical American partner. Modi was happy to signal that, unlike during the Cold War when India rebuffed US overtures to show interest in America’s priority of containing the Soviet Union, this time India is eager to team up with it.

(This appeared in the print edition as "Friends With Many Benefits")

Aparna Pande is Director of Washington-based Hudson Institute’s Initiative on the Future of India and South Asia.