Foreign Hand: The Lama of Minneapolis

Football, Pokemon, rap music, graphic novels…and Buddhism? Meet Jalue Dorje, as American teen as you can get, but also Tibetan, and an anointed reincarnation. 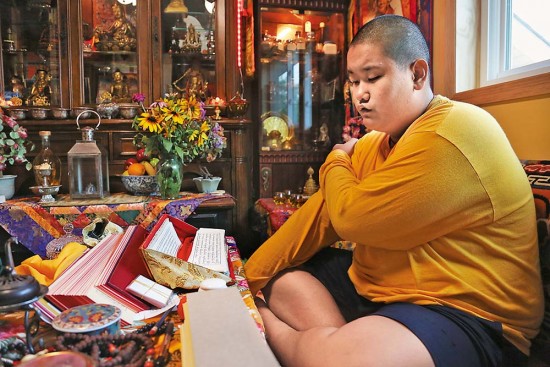 In most ways, Jalue Dorje is a typical American teen—he grew up in a suburb of Minneapolis, loving football, Pokémon and rap music. Yet a few years from now, he’s expecting to say goodbye to his family and homeland and join a monastery in the foothills of the Himalayas—from an early age, he was recognised by the Dalai Lama and other Tibetan Buddhist leaders as a reincarnated lama. Since that recognition, he’s spent much of his life training to become a monk, memorising sacred scriptures (often rewarded by his dad with Pokémon cards), practising calligraphy and learning the teachings of Buddha.

Now he’s 14 and entering his first year of high school. After graduation in 2025, he’ll head to northern India to join the Mindrolling Monastery, more than 11,500 km from his home in Columbia Heights. Following a period of contemplation and asceticism, he hopes to return to America to teach in the Minnesota Buddhist community. His goal? “To become a leader of peace,” he tells the Associated Press. “Like the Dalai Lama or Gandhi or Nelson Mandela.”

The process of identifying a lama is based on spiritual signs and visions. Jalue was about four months old when he was identified by Kyabje Trulshik Rinpoche, a venerated master of Tibetan Buddhism who was the leader of the Nyingma lineage. He was later confirmed by several other lamas as the eighth Terchen Taksham Rinpoche—the first one of whom was born under the name Taksham Nüden Dorje in 1655. After the Dalai Lama also recognised him at age two as the guru’s reincarnation, Jalue’s parents took him to meet the spiritual leader of Tibetan Buddhism when he visited Wisconsin in 2010. The Dalai Lama cut a lock of Jalue’s hair in a ceremony. He also advised the parents to let their son stay in the US so he could perfect his English. Jalue is fluent in English and Tibetan and often gets As in class. Although he was officially enthroned in a 2019 ceremony in India, he’s still living in Columbia Heights, where his parents decided he’ll stay until graduation. In Jalue’s room, a photo of the Dalai Lama rests above DVD collections of The Simpsons, Family Guy and South Park, next to volumes of Buddha—a graphic novel series by Osamu Tezuka, a master of Japanese manga. Would it be easier if he was just a regular teen? “Nothing like that crosses my mind,” he says, laughing. He knows he’s Tibetan. He also knows he’s American. But like the youth of today, he is a global citizen as well.