Glad To Oblige, Pardner: Trump Soaks In Modi's Welcome, India Basks In Nimbus Of US Power

But, as dust from the pomp and circumstance settles down, it may be a legitimate question to ask: What the visit was all about? 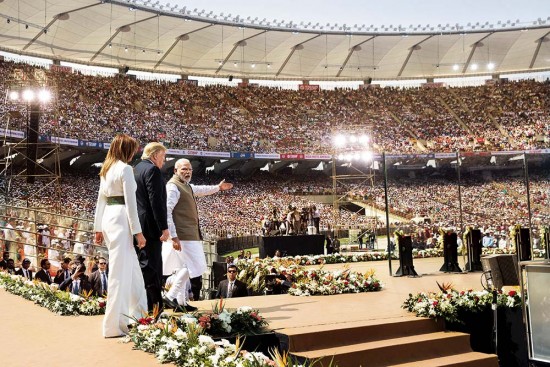 Prime Minister Narendra Modi delivered what he had promised Donald J. Trump. He turned his presidential visit into a memorable spectacle and also succeeded in making one of the most polarising American presidents in history feel immensely popular and loved after his two-day Indian sojourn. “It was an expression of real love. Everybody saw and witnessed that,” said Trump about the rousing welcome he received in Ahmedabad, Agra and Delhi.

But even as the bonhomous negotiations between the two leaders conti­nued, communal riots raged in  northeast Delhi, killing more than two dozen people and injuring hundreds. The ugly tension was stoked on the eve of Trump’s visit and reached a crisis point as he was in Delhi, raising questions about its motivation. Was this an attempt to embarrass Modi as he was feting this most honoured of guests?