Afghanistan is out of bounds and in flux. Countries, including India, scramble for a Central Asian seat for a good view. 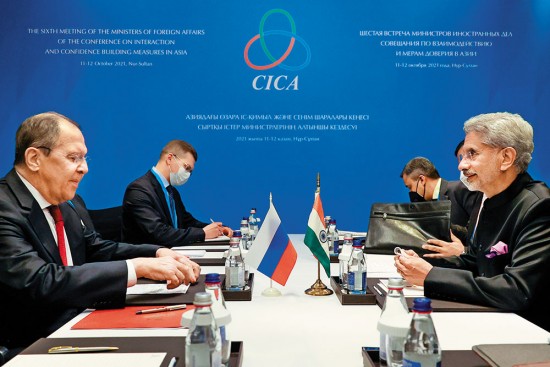 Central Asia was once the centre of global geo-politics during the 19th and early 20th century, as the British and Russian empires jostled for supremacy in the Great Game. Now, after the shambolic withdrawal of US troops from Afghanistan and the Taliban takeover, Central Asia is again emerging as a focus of the international community. Its importance emerges amidst a growing concern that Afghanistan could become a hub of global terror, endangering both the volatile region and, in a few years, even the US and Europe.

With most major powers uns­ure of the future, they hope to get a foothold in Central Asia to keep an eye on Afghanistan. Whether it is the US, India, Iran, EU or Turkey, diplomats are rushing to Central Asian countries. Russia, historically, has been the major power in the region. China’s chequebook diplomacy has also worked well, with most countries signing on to President Xi Jinping’s Belt and Road Initiative.

India is planning to hold a meeting on Afgh­anistan next month, where Central Asian countries will be invited. India’s presence in Tal­­i­­ban-­ruled Afghanistan has been reduced to nothing after its staunch support to the Ashraf Ghani regime. New Delhi is trying to work its way back to becoming a player in the region. Foreign minister Subramanyam Jaishankar has travelled to the region thrice this year. His last trip was to Kazakhstan for a meeting of CICA—Con­ference on Interaction and Confidence-Building Mea­su­res in Asia. The talks centred on facing the latest security challenge posed by the situation in Afghanistan. Secular governments in the neighbourhood have long faced Islamic gro­ups wanting to impose Sharia rule. Since the Tali­ban victory, these outfits are regrouping with renewed zeal.

Ever since the break-up of the USSR, successive Indian governments have tried to forge ties with these former Soviet republics. While historical links exist, connectivity poses a challenge. After 1991, India geared up to enhance economic and political ties. Nearly 80 per cent of India’s supply of uranium, needed for its nuclear power plants, comes from Kazakhstan. Uzbekistan, too, has begun exporting uranium to India from 2019.

“Central Asia is on the public radar because of Afghanistan but successive Indian governments regarded the region as vital. After Central Asian nations were independent, New Delhi referred to it as a part of its extended neighbourhood. India used Central Asian neighbours to send help to Ahmad Shah Masood, the Northern Alliance commander, in his fight against the Taliban. India was constrained earlier by lack of funds and connectivity problems still persist,’’ says Nandan Unni­krishnan of the Observer Research Foundation.

Russia regards Central Asia as its sphere of influence. It fears the West would use the Afghan situation as an opportun­ity to encircle it in its backyard.

For India, connectivity is a major hindrance. The North-South corridor, which could have made a difference, could not proceed due to US sanctions on Iran. Work still continues in fits and spurts. Ashoke Mukerji, who was consul general of India in Soviet Central Asia in the 1990s, helped transform India’s ties with the five newly indepe­ndent countries of Uzbekistan, Kazakhstan, Kyr­g­yzstan, Tajikistan and Turkmenistan. He spoke of the Islamic-tribal religion followed in the region that was a bulwark against religious extremism.

“Even before central Asian nations came under Communist Russia’s influence, they practised a moderate Islam far from the rigid Wahhabi sch­ool. While efforts are now being made by Sunni outfits to change that, the Islam practised there is an insurance policy for the world,’’ says Mukerji.

So far, the Taliban has not inspired much confidence. Women are grossly marginalised again, violent attacks on Shia places of worship continue and the Taliban itself faces a major challenge from the ISIS-K, which is entrenched in parts of the country. Al-Qaeda, the East Turkestan Islamic movement, Lashkar-e-Taiba are all present and have close links with Taliban factions. So, despite repeated assurances from the Doha Taliban leadership that Islamic terror groups will not be allowed to operate against other countries, whether the Taliban are able to, or wish to, keep that promise remains a question mark.

Having hastily brought America’s longest-running war to an end, Washington is aware of the mess left behind and the dangers posed by Islamic groups to the US. So, over-the-hori­zon strikes are part of the US strategic doctrine for Afghanistan. For this, a friendly government in Central Asia will be a major help. But Russia and China are in no mood to allow America to make a dent in what they perceive as their region of influence. The Shanghai Cooperation Organisation is primarily a Central Asian grouping to ensure that Western powers are kept out. Moscow is fine with China building and financing infrastructure projects, but is wary of Beijing’s att­empt to extend its political influence in the region.

Central Asian nations once part of the USSR are closely all­ied to Moscow. Russia regards the region as its backyard and closely allied to its own security interests. Moscow is worried that Western powers will use this opportunity to encircle Russia. NATO activities in the Black and Baltic seas, its effo­rts at promoting democracy and regime change in Ukraine and Georgia is of great concern to President Vladimir Putin. Afghanistan’s current state of flux gives the US the perfect opportunity for stepping up diplomacy in Central Asia.

Indeed, US efforts towards that end is gaining urgency under Presi­d­ent Biden. President Shaykat Miziyoyev of Uzbekistan was received in the White House last year by President Trump. Foreign minister Abdulaziz Kamilov was in the US in July and met secretary of state Antony Blinken and defence secretary Llyod Austin. Discussions on regional security are afoot. The US now regards Uzbe­k­i­stan as a vital ally and wants it for intelligence and surveillance operations in Afghanistan. It also announced its commitment to the Uzbek-Afghanistan-Pakistan corridor to facilitate Uzbekistan’s access to the Indian Ocean. US deputy secretary Wendy Sherman was in Tashkent in early October, before travelling to India and Pakistan.

However, Uzbekistan has rejected any suggestion on possible stationing of US troops there. Moscow’s unhappiness over the proposal was apparent when its foreign minister, Sergei Lavrov, said that former Soviet states do not want US troops in their respective countries.

Keen to blunt the determined American thrust in Central Asia, Russia got Tajikistan to host a meeting of the Collective Security Treaty Organi­sation, comprising Russia, Belarus, Armenia, Kazak­hs­tan, Kyrgyzstan, and Tajikistan, to discuss the security fal­l­­­out of the Taliban victory. For now, Russia’s holding ope­­­­ration is working. Whether it can sustain it remains to be seen.

(This appeared in the print edition as "In Grand Central")