PM Narendra Modi’s personal equation with the Pope relieves India’s Christians; at the G20 summit he promises jabs for the world; at COP26 in Glasgow the premier pledges that the country would attain net zero emissions by 2070 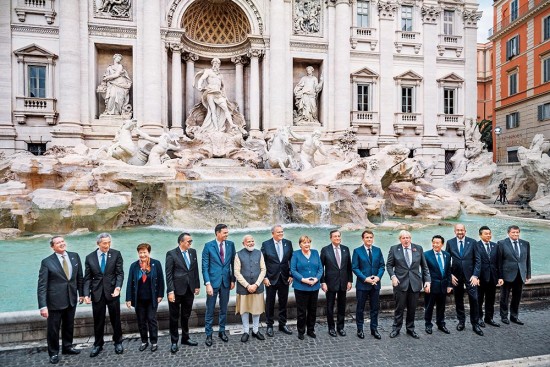 If a photograph can gladden the hearts of Indians of a particular religious faith, it has to be this. Images of Prime Minister Narendra Modi and Pope Francis, the head of the Catholic Church, in a warm embrace during their meeting at the Vatican last weekend has spread hope among Christians, particularly Catholics. The PM has invited the Pope for a visit to India. The Vatican has indicated that considering the pontiff’s tight itinerary, a visit could only materialise in the latter part of 2022. The meeting is significant, considering the West’s concern about religious freedom in India since Modi took office in 2014. The PM was in Rome for the G-20 summit when he called on the Pope.

Reports of sporadic attacks on churches by hard-line fringe groups, who accuse Christians for converting Hindus, has led to disquiet in the community. In 2020, a US panel on religious freedom had pinpointed India as a “country of particular concern” and had provoked the Indian government to accuse them of bias and a “new level of misrepresentation”. In 2017, when Pope Francis was planning his visit to neighbouring Bangladesh and Myanmar, he also wanted to visit India. For reasons unknown, that didn’t happen.

When in Rome, Western leaders often meet the Pope. US President Joe Biden, a practising Catholic, met the Pontiff a day before Modi. Biden is under fire from US Catholics for his support of abortion. In a signal to conservative Catholics back home, Biden said that the Pope had called him a “good Catholic”. Indian premiers like Jawaharlal Nehru, Indira Gandhi and I.K. Gujral had called on earlier Popes. But for Modi to do so is more significant. Moreover, there was speculation that the Vatican could raise the prickly subject of religious freedom.

The meeting between Pope Francis and Modi cleared all doubts. The meeting, scheduled for 20 minutes, extended to an hour, as the two shared views about the pandemic and climate cha­­nge. The Argentine born Pope is a climate activist and speaks out against the unbridled capitalism. Like all South Americans, he is also a football fan.

Prime Minister Modi presented the Pope with a silver candelabra and a book, The Climate Climb: India’s strategy, actions and achievement, detailing the government’s environmental act­ion. Francis gave Modi a collection of his teachings and a bronze medallion with the Italian inscription, ‘The desert will become a garden’.

At the G20, Modi sold the India story and stated that the country would produce five billion vaccine jabs by the end of 2022. Both India and the world would benefit.

From the Vatican, Modi drove to the G-20 summit venue, the first in-person meet since the pandemic. The grouping generally deals with the economy, but this time around, Covid-19 was at the front and centre of the conference. The disruptive pandemic has devastated economies, sparing neither rich nor developing nations. Supply chain economics, which broke down during the pandemic and made the world aware of how everyone depended on China, was also an imp­ortant element of the G-20 discussions. Missing the mega gathering was Chinese President Xi Jinping and Russia’s Vladimir Putin. US relations with both China and Russia are in the doldrums, with Biden following former president Trump’s lead and regarding Beijing as the main threat to American supremacy. The US’ jousting with Russia continues apace.

As the world hopes to repair economies and ens­ure equitable distribution of the vaccine, opening up countries for travel was also discussed. The pandemic led to countries closing borders, but a habit of protectionism persisted even after vaccines became available. Richer nations cornered more shots than required, leaving large parts of the developing world, including countries in Africa, woefully short of vaccines. At the G-20 summit, UN Secretary General Antonio Guterres made a strong pitch for vaccine equity. He later tweeted: “Vaccine inequality is prolonging the pandemic at great human and economic cost. Today...I urged leader at #G20Rome­Summit to show leadership to save lives, prevent further suffering, and enable a full global recovery.”

Riding on the back of one billion vaccinations administered in India, PM Modi sold the India story in Rome. Reminding G-20 leaders that India was the pharmacy of the world, Modi explained how the country had ramped up production capacity and was in a position to produce five billion vaccine jabs by the end of 2022 for India and the world. This, he said, would solve the problem of limited supplies. India produces vaccines and markets them at prices affordable to poorer nati­ons, unlike major Western pharmaceutical firms. During the AIDS epidemic in Africa, it was Indian pharmas’ cheaper drugs that helped save lives.

On the heels of the G20 summit comes the UN Climate Change Conference, or COP 26, in Glasgow. It is organised by the UK’s Boris Johnson together with Italy’s Mario Draghi to review progress of commitments made by countries at the 2015 Paris Climate Change Agreement. In Glasgow, Modi had a bilateral meeting with Johnson ahead of the COP 26. The big-ticket item up for discussion here is the free trade agreement between India and the UK.

But the focus in Glasgow will be on climate change.  China, US, India, Russia and Japan are the world’s largest polluters. But it is an unfair grouping, for the US and other Western industrialised nations have been offenders for far, far longer periods, when India and China had little industrial development. The argument has always been about the richer nations providing funds for developing nations to switch to clean technology. In Paris, they promised $100 billion annually for the transition, but it has not been kept.

Climate activists demand that countries agree on a ‘net zero’ emission target by 2030. India had flatly refused till now, saying it is in no position to do so when it is trying to change the lives of a billion citizens. Finally, on November 1 in Glasgow, Modi pledged a net zero emissions goal for India by 2070. Admittedly, coal, that satiates much of our energy needs, is a foremost polluter. Modi has been championing a solar alliance. Wind is ano­ther source. But new technologies are expensive.

“India needs to do more in its self-interest, not because of its contribution or responsibility,’’ says environmentalist Sunita Narain. Despite sol­­emn promises made by the Centre on protecting the environment, state governments care little for fragile ecosystems and trample upon them in the name of development. Forests are destro­yed for minerals and stubble burning by farmers continues unabated. Climate change has caused devastation in India, and frequent floods, drou­g­hts, and high temperatures are the norm. It is to be seen how India goes about to keep its promise of zero carbon emissions in 50 years time.

“We need development and energy access, but given that the world has run out of carbon space, we must in our self-interest do more. But for this we need global leadership and transfer of finance and technology,” she adds. The rich world, ins­tead of lecturing developing nations, needs to put their money where their mouth is.

(This appeared in the print edition as "Marked In Carbon")