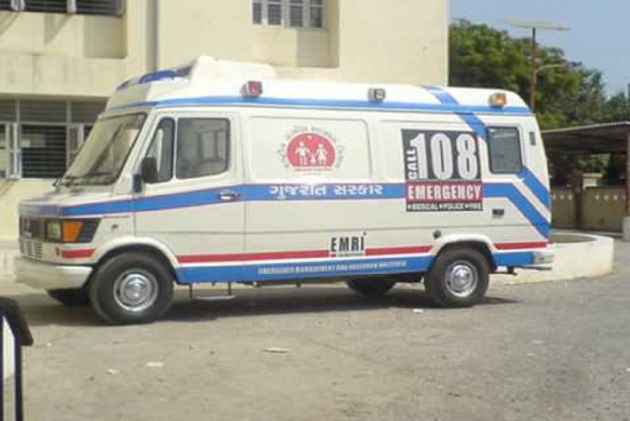 The '108' emergency ambulance service was partially hit today in three districts of Gujarat as its operating staff went on an indefinite strike, an official said.

The employees have been demanding pay hike and reinstatement of their sacked colleagues, he said.

There are 585 such ambulances deployed across Gujarat state by GVK EMRI.

Out of these, around 40 vehicles have been non-operational since this morning as the staff suddenly announced to go on strike, GVK EMRI's Chief Operating Officer (COO), Gujarat operations, Jaswant Prajapati said.

Each ambulance usually has an emergency management technician and a driver.

"The call for strike was first given by the staffers of Mehsana 108 service, as we have initiated an inquiry against some of them and also took action in the recent past. Later, some staff members in Navsari district and Surat city joined the strike," Prajapati said.

"Out of the total 585 ambulances currently deployed across the state, around 40 are not in service as its staffers are on strike. Of these 40 ambulances, 15 are in Mehsana, 12-13 in Navsari and also 12-13 in Surat," he said.

"The agitating employees want pay hike and reinstatement of the staff members who were sacked earlier," Prajapati said.

He said the strike is illegal and can attract punitive action.

"Since the 108 ambulance service is covered under the Essential Services Maintenance Act (ESMA), it is illegal for its staff to go on strike," Prajapati said.

"Our priority is to ensure that people get the emergency service on time. We may deploy new staff to run these ambulances if the agitating employees do not return to their jobs," he said.

Meanwhile, Gujarat health minister Shankar Chaudhary urged the company as well as district collectors concerned to resolve the issue to minimise the possible hardship that the strike may cause to people.

"Our government has asked the company to take this issue seriously and try to resolve it as soon as possible. We have also instructed the respective district collectors to ensure that people do not suffer due to the strike," Chaudhary told reporters.