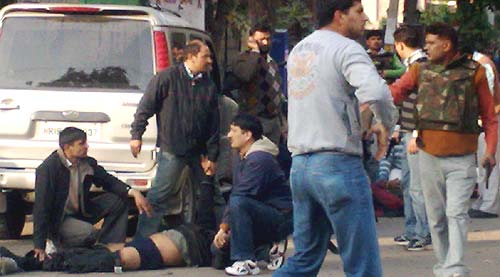 outlookindia.com
-0001-11-30T00:00:00+0553
Four members of a gang of robbers, including its kingpin, were on Monday injured in a daylight shootout with police which claimed to have foiled their plan to rob a bank in a posh south Delhi locality while five other gunmen managed to flee.

Three policemen also suffered minor injuries during the encounter in which four criminals were arrested. All the robbers, belonging to a gang headed by a notorious criminal Satya Prakash alias Satte, hailing from neighbouring Uttar Pradesh, were admitted to a hospital. One of them was operated upon.

The whole drama unfolded in Green Park Extension here this evening as heavily-armed policemen wearing bullet-proof jackets who were trailing the robbers rammed their vehicle into one of the two cars occupied by the gang members.

"We had prior information that the gang would come to rob a bank in Green Park this afternoon and a trap was laid near a Residential Welfare Association (RWA) gate in the area," Deputy Commissioner of Police (South) H G S Dhaliwal told reporters here.

The policemen jumped out of their vehicles and surrounded the gunmen's car, sources said. "They had no response time and the four gangsters, including their leader Satya Prakash, who were travelling in the Honda Accord, opened fire at the police which retaliated".

Four gangsters in Honda car received injuries while five others who were in another car managed to flee from the scene, Dhaliwal said.

The injured identified as Satte, the gangleader, Shakeel, Sonu and Nadeem, who is of either Afghan or Uzbeck orgin were nabbed.

"Two of the injured had sustained bullet injuries in chest while another two were shot in hand and leg," said Biplab Mishra, Assistant Professor Surgery, AIIMS trauma centre. "The four were between 20-30 years of age and three of them were stable."

Dhaliwal said the gang possessed sophisticated imported weapons. "Our personnel were well prepared. They were wearing bullet-proof jackets," he said.

Satte has about 25 cases, including those of robberies, attempt to murder and possessing illegal arms, registered against him.

Joint Commissioner of Police (Southern Range) Ajay Kashyap said the the gang members "were possessing high quality firearms which are made across the border."

City Police Commissioner Y S Dadwal announced a reward of Rs 25,000 for anyone providing information about five alleged robbers who escaped from the gunbattle scene in a white Santro car with the number DL 2C AD 1144.

While Shakeel is a resident of Mustafabad, Sonu alias Kuldeep Singh is a resident of South Ext while Nadeem lives in Lajpat Nagar. The nationality of Nadeem is yet to be established, Dhaliwal said adding he is either of Uzbeck or Afghan origin.

Police recovered four imported pistols, two khukris, a number of cell phones, gloves and two rucksacks from them, the DCP said. He said the police used pistols and other smaller weapons and not automatic weapons like AK 47 as the area is semi-residential.