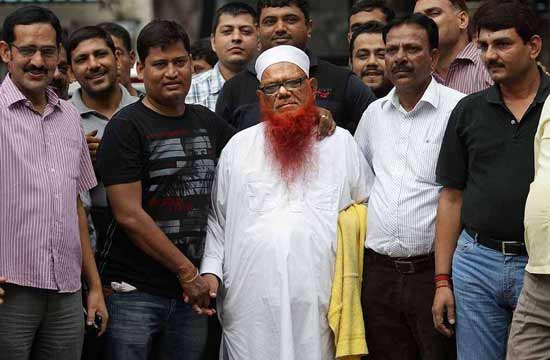 Notwithstanding tight security, Abdul Karim Tunda, top LeT bomb expert, was today assaulted in the premises of a Delhi court which remanded him to four day police custody to quiz him in connection with 37 bomb blast cases across the country.

Tunda was hit on his back and stomach by alleged 'Hindu Sena' activists whose attempt to slap him was thwarted by the escorting police personnel who later formed a human chain to guard him.

The 70-year-old terrorist was produced before Metropolitan Magistrate Jay Thareja who extended his custodial interrogation for four days till August 24.

The Delhi Police had sought Tunda's custody for 10 days for taking him to three different places outside the national Capital for probing his links with various terror outfits.

The police said Tunda was declared a proclaimed offender in a case of recovery of explosive substances lodged in 1994 at south Delhi's Malviya Nagar police station under the provisions of stringent anti-terror law TADA.

Immediately after he was produced in the court, Tunda said he did not have money to hire a lawyer but some advocates volunteered to represent him and advocate M S Khan who had the 'vakalatnama' (power of attorney) was allowed to appear for him.

During the proceedings, which were held in-camera, after a lawyer interrupted it, Tunda told the court that he was "innocent" as he had not motivated anyone to kill women and children by exploding bombs.

Advocate Khan told reporters after the proceedings that Tunda claimed in the court that he used to teach others about 'Jehad' its true meaning which bars any kind of violence.

The police, while seeking extension of Tunda's remand, said that in 1994, he had left India and during 1996-97, 37 bomb blasts took place in North India, including New Delhi, Varanasi and Kanpur.

Police told the court that 27 blasts had rocked the national Capital in 1997-98 and various cases were lodged in connection with these blasts, sources said.

The police also said that during the investigation of these blast cases, one terrorist was arrested with 150 kgs explosives by the police and he had claimed that it was Tunda who had provided him the explosives.

Additional Public Prosecutor Rajiv Mohan said that another suspect was arrested by police in connection with a 1998 blast case and he had also told the interrogators that Tunda had played a vital role in the conspiracy behind the blasts.

The police told the court that Tunda was providing logistic supports to these terrorists who were executing the bomb blasts in Delhi and other areas of North India, the sources said.

In 1997, 20 persons were killed while 281 were injured in various blasts that had rocked the national Capital. Tunda had played a vital role in execution of these explosions, police told the court.

The special cell said it was collecting the FIRs lodged against Tunda in different states and during the police custody, they will take him to three places to gather evidence.

It also said that his sustained custodial interrogation will help them in unearthing the module of other banned terror outfits which are active in India.

Khan said the court had asked the police to ensure proper security and safety of Tunda in the wake of him being assaulted inside the court premises today.