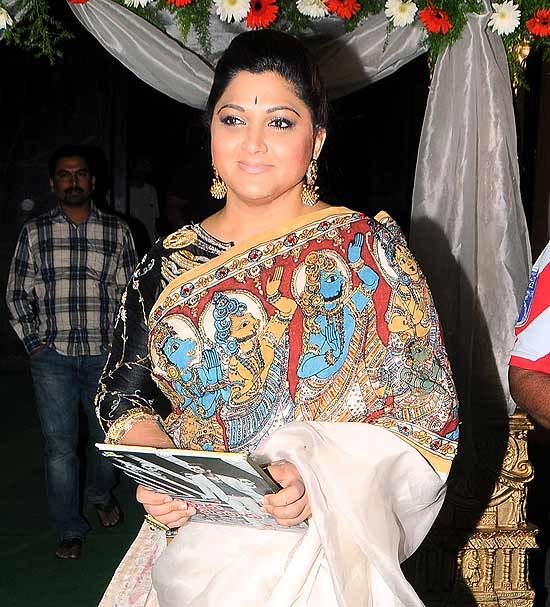 In an apparent spillover of sibling rivalry in the DMK first family, unidentified persons threw stones at actress and party leader Khushboo and her house in separate incidents over her comments on the elevation of M K Stalin, party chief M Karunanidhi's son.

Khushboo escaped unhurt when stones and footwear were hurled at her as she was coming out of a hotel at Tiruchirappalli where she was on a visit to attend the marriage of DMK Rajya Sabha MP Tiruchi N Siva's daughter, police said.

The miscreants also shouted slogans, 'Khushboo is anti-DMK, anti-Stalin' before fleeing the spot.

Karunanidhi and Stalin were also present at the wedding.

In Chennai, stones were hurled at Khusbhoo's house but none was injured. Some bulbs were broken in the stone-pelting, police said.

The provocation for the attacks seemed to be her interview to a Tamil weekly that Karunanidhi's mere statements would not ensure Stalin's elevation as it is the decision-making bodies in DMK which will take a call on such matters.

"People have misunderstood and misinterpreted my version in the Tamil Magazine. I have not made any wrong statement about Stalin or the decorum of the party. I am loyal to the party and obey what the leaders say," she told reporters at Tiruchirappalli.

Karunanidhi had recently publicly acknowledged Stalin to be his heir-apparent over his elder brother Union Minister M K Alagiri, who reacted sharply to it, saying DMK was "not a mutt" where a successor could be anointed by the incumbent pontiff.

The succession saga goes a long way in the DMK ranks and it reached a flashpoint few years ago by way of a survey in Tamil daily Dinakaran, promoted by Karunanidhi's grandnephews, the Maran brothers.

The survey had not only ranked Stalin ahead of Alagiri, the party's Madurai strongman, but also given him very low ratings, prompting angry reactions from his supporters who were allegedly behind torching the daily's office in Madurai, killing three employees.

Khushboo is no stranger to controversy as she had some years ago stirred up a controversy over her remarks on pre-marital sex, prom