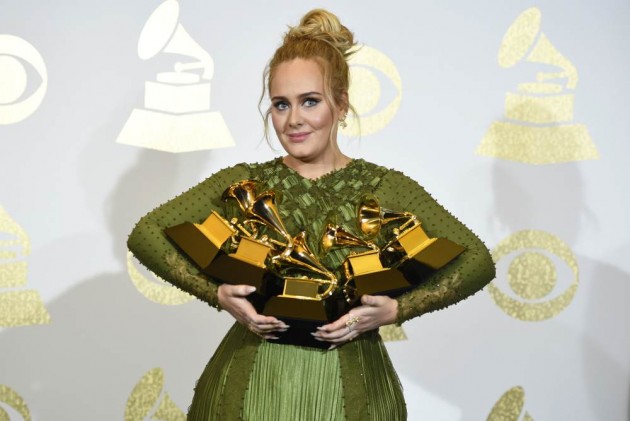 Beyonce may have dazzled with her power-packed performance but the night belonged to British singer Adele, who walked away with major prizes -- Album of the Year, Record of the Year and Song of the Year -- in a surprise upset at the 2017 Grammys.

Adele won in all the five categories that she was nominated for including Best Pop Solo Performance and Best Pop Vocal Album, triumphing over Beyonce, who was the front-runner in the race with nine nods for "Lemonade" out of which she won just two - Best Urban Contemporary Album and Best Music Video.

The 28-year-old "Hello" singer, who suffered technical issues second year in a row at the ceremony, acknowledged Queen Bey, as Beyonce is popularly known among fans, in her speech.

"All us artists adore you. You are our light. My queen and my idol is Queen B. I adore you," Adele said to Beyonce.

Beyonce may have lost out the top trophy to Adele during the 59th annual Grammys, but her performance on "Love Drought" and "Sandcastles" was the highpoint of the ceremony, as the pregnant singer revealed her baby bump.

At the end of her nine-minute-long fiery performance, the star grinned and blew kisses to her rapper husband Jay Z and five-year-old daughter, Blue Ivy, who were cheering her from the audience.

Yo-Yo Ma's "Sing Me Home" features tunes composed or arranged by different global artists as it examines the ever-changing idea of home.

"It is third time lucky for us. I am very proud of who I am and where I come from be it culturally or musically. I wish there were more acknowledgment from my own country for the music that is deep-rooted and in our blood," Sandeep told PTI over phone from LA just after his win.

Chance the Rapper became first Black rapper to win the Best New Artist since 1999 at Grammys. The 23-year-old star picked up the trophy for for his third official mixtape, "Coloring Book".

The music star took home Best Rap Album as well as Best Rap Performance for "No Problem" with 2 Chainz and Lil Wayne.