After Poll Win, Farooq Abdullah Calls For Governor's Rule In Jammu And Kashmir 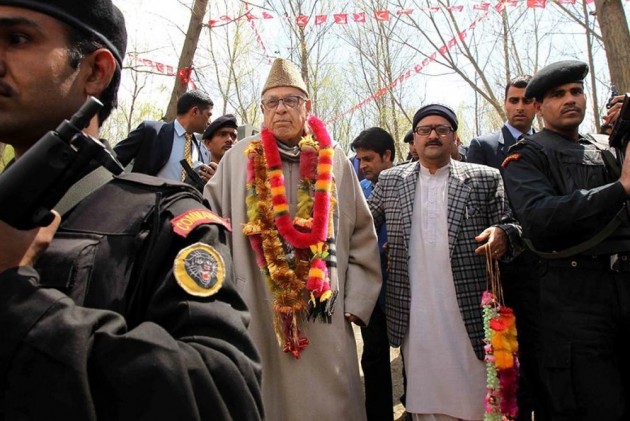 Print
A
A
A
increase text size
Outlook April 15, 2017 17:47 IST After Poll Win, Farooq Abdullah Calls For Governor's Rule In Jammu And Kashmir

National Conference president Farooq Abdullah, who won the Srinagar Lok Sabha constituency bypoll, today demanded that Governor's rule be imposed in Jammu and Kashmir as the state government had failed to ensure a peaceful election.

"I appeal to the Governor and the President of India to dismiss this government and impose Governor's rule in the state where the people will get some respite and feel that such situation will not arise again," Abdullah said speaking to reporters after his poll victory.

Abdullah, whose victory is being seen as a setback to the ruling PDP demanded that the bypolls to the Anantnag Parliamentary seat, which have been deferred till May 25, should be held under Governor's rule.

I will also say that the election in Anantnag should happen under the Governor's Rule, he said. Otherwise it is unlikely that the people would get justice, he said.

Claiming the the eight youth who had died in the poll day violence were "martyred", the National Conference chief said that several others were in hospitals or jails and he had never seen such an election.

He expressed gratitude towards the people who risked their lives to vote in "such a difficult situation.

The polling for the Sri Nagar Lok Sabha seat had seen an abysmal turnout of 7.13 per cent, the lowest ever in its history while eight persons lost their lives.

The NC leader trashed the rumours that he would resign from Lok Sabha after today's win and said that he would follow what his party high command decides.

Reacting to the video of a youth tied up to an army vehicle, Abdullah said it is very shameful and a very bad act against democracy.

I request them not to do such things which will add to the fire and render it uncontrollable, Abdullah said.

He batted for resumption of Indo-Pak talks and dialogue with all stakeholders including separatist Hurriyat Conference.

War is not a solution to anything, he said.

Asked about the dismal poll percentage in the bypolls, Abdullah replied by saying "How does it matter? We have seen polls before also where hardly any percentage was there. It does not make any difference. Democracy has been there."

"What do you say to the people who have voted, even if it may be seven per cent with all the pressures on them?", he asked.