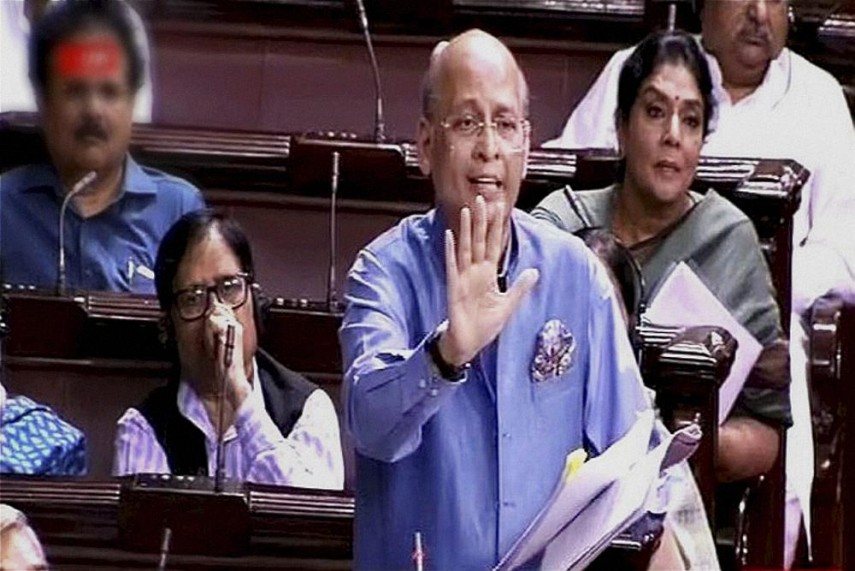 The controversial AgustaWestland chopper deal today triggered a stormy debate and trading of charges in the Rajya Sabha with the entire opposition pressing for a Supreme Court-monitored probe while Defence Minister Manohar Parrikar spoke of an "invisible hand" in preventing an investigation in UPA tenure.

Newly-nominated BJP leader Subramanian Swamy, who was fielded by the ruling side, demanded recording of statement from former Prime Minister Manmohan Singh along with others named in the judgement of an Italian court recently.

The ruling and the opposition benches clashed repeatedly as the House took up a short-duration discussion on the raging row over the Rs 3600 crore deal in the wake of an Italian court's judgement in which certain initials like "AP" have been recorded.

The five-hour debate ended with a walkout by Congress after its demand for SC-monitored probe was rejected by the government. Leader of Opposition Ghulam Nabi Azad described as an "insult" the Defence Minister reading out a prepared statement in his reply and said it contained only allegations.

As Congress members raised objections to Parrikar reading out his reply from a prepared text, Deputy Chairman P J Kurien ruled that a Minister has all the right to read from a prepared speech.

Swamy, who has already tilted at the windmills last week seeking to drag Sonia Gandhi into the row, refrained from naming her but made suggestive remarks on Congress leadership, repeatedly drawing protests from the opposition side.

The Congress fielded the then Defence Minister A K Antony, Congress President Sonia Gandhi's political secretary Ahmed Patel along with Abhishek Manu Singhvi to defend the actions of the previous UPA government, insisting that there was no wrongdoing.

All of them pressed for a thorough and urgent probe into the matter to clear the air, with Leader of Opposition Ghulam Nabi Azad wanting the investigation to be monitored by the Supreme Court and completed in three months. The government, however, rejected the demand.

"Act now... Take strong action but don't threaten, don't blackmail," said Antony, while contending that he had immediately taken action after allegations of corruption surfaced in 2012.

He contended that it was the Vajpayee government which had taken all the "major" decisions, including with regard to the parameters of cabin height and flying altitude of the helicopters.

Patel, whose name has been dragged into the row because of the initials "AP' found on a hand-written note cited in the judgement, also sought a probe, declaring that he will quit Rajya Sabha as well as public life if any wrongdoing on his part was proved.

While replying to the debate, Parrikar said the ongoing probe will focus on those named in the Italian Court judgement even as he suggested the role of an "invisible hand" in preventing a proper investigation earlier.

Targeting the previous UPA government, Parrikar said there was "relentless push" by the UPA to go in for the AgustaWestland choppers.

He, along with Parliamentary Affairs Venkaiah Naidu, rejected the opposition demand for Supreme Court-monitored probe, protesting which Congress staged a walkout.

Narrating amid repeated disruptions the sequence of events related to the deal, the Defence Minister said CBI had registered a case on March 12, 2013 but it did not bother to forward a copy of the FIR to ED for nine months.

"It appears an invisible hand was guiding action or inaction of CBI and ED," the Minister said.

Noting that a probe was already underway, he said, the "inquiry will focus on roles of those named in the judgement of Italian court.. Government will leave no stone unturned in bringing to justice those involved in the scam."

He said CBI has already done a lot of investigation and is currently on the money trail to track down where the bribe money went.

"Pursuant to the judgement of the Milan appelate court, the Defence Ministry has written to both ED and CBI to take into account contents of the judgement and conclude the investigations expeditiously," Parrikar said.

He added that the Defence Ministry is initiating the process of blacklisting the companies concerned and for legal proceedings for recovery of damages.

Beginning his speech by promising to not take names so that there is no disturbance, the Defence Minister mentioned an anecdote of Birbal related to a "theft" to suggest that the Congress was unnerved, fearing the truth would implicate it.